A Look at March US Hotel Profitability as COVID-19 Hit


These are certainly not the circumstances under which STR wished to launch its new monthly profit-and-loss program, but considering the role of data during times of crisis, the launch could not have been timelier.

(STR is the parent company of Hotel News Now.)

The first month for which STR is reporting P&L data happens to be the first month to show a visible COVID-19 impact on the traditional U.S. hotel performance numbers. This produced an astounding 101.7% year-over-year decrease in gross operating profit per available room (GOPPAR), the key profitability indicator. These figures are somewhat lessened by the fact that most of the major impact from COVID-19 began in that second week of March for much of the country. Gross operating profit finished in the red nationwide, with a GOP margin of -2% of total revenues, compared to March 2019 when the average GOP margin was +42.1%.

Earnings before interest, taxes, depreciation and amortization losses were even more severe, declining year-over-year by 116.7%. The resulting EBITDA margin was -14.7% of total revenues. While GOPPAR is the best P&L key performance index for benchmarking purposes, EBITDA is even more significant right now as hoteliers struggle to reduce monthly losses. It is important to note that EBITDA is inclusive of management fees, rent, property taxes, insurance and other fixed charges, but excludes replacement reserves and owner’s expense. As such, EBITDA doesn’t tell the whole story of what hotel owners have to deal with right now.

Department-specific numbers
This latest benchmarking program from STR will allow hoteliers to index overall profitability and benchmark all revenue departments, expense and labor costs by department. In total, the program covers more than 100 data points from the P&L, similar to STR’s annual HOST and P&L programs.

Labor costs were significantly reduced in March, with total labor costs per available roomnight (LPAR) falling 31.2% as hotels reduced staffing levels to deal with dramatically reduced demand levels. Not surprisingly, variable expenses were much more well-controlled, as these expenses are closely tied to demand and revenue levels. Expenses that are largely fixed were more detrimental to the bottom line, yielding no relief for rapidly declining demand levels. Case in point, room expenses declined 42.3%, while administrative and general (A&G) expenses declined only 8%.

Total food-and-beverage revenues declined 72.5%, exacerbated by dramatically reduced revenues from the Other F&B department. This department includes revenue from meeting space rental, audiovisual equipment rental and F&B service charges. It is significantly impacted by group demand and catering and banquet events. As we’ve seen in our segmentation data, group business has been hit even harder than the transient segment, hence the dramatic 92.2% decline in revenues. 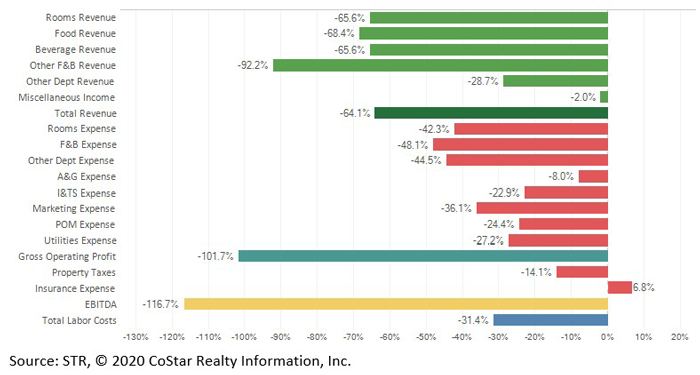 Market-level data
The top U.S. markets with the worst GOPPAR declines in March were New York (-203%), Chicago (-201.4%) and Seattle (-158%). These markets were some of the first markets to be heavily impacted by COVID-19. No market has been safe from the pandemic, as we’ve seen consistent revenue-per-available-room declines across the country. Markets such as Oahu Island, Hawaii—in which the March impact was lesser—were slow to feel the impact of COVID-19 and stayed open for business longer generally. 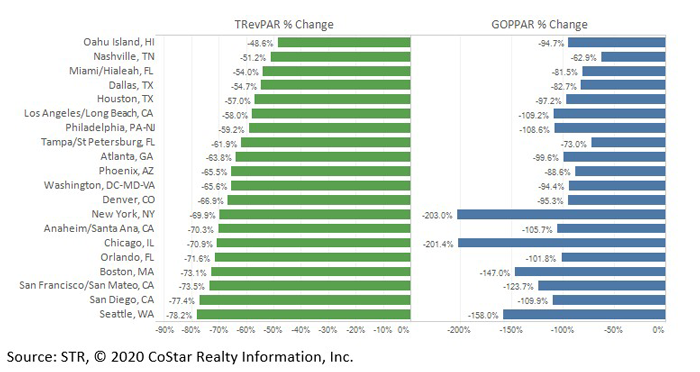 The upper-upscale class demonstrated the strongest profit decline (-108.1%). A sign of just how bad the profitability situation turned: Midscale-class properties fared best with a GOPPAR decline of “only” 46.4%. Limited-service hotels “outperformed” full-service with a 79.8% GOPPAR decrease compared to a 103.4% drop. These numbers echo what we’ve seen in our weekly data the past several weeks, with the limited-service segment faring comparatively better.

Looking to the past for the future
The revenue declines over the past two months have far exceeded the worst of 2009 levels; however, we can learn a lot by looking back at 2009 performance. For example, if we look at the relationship between RevPAR and profitability, we see that in 2009, profit declines equated to 1.7 times the RevPAR declines for full-service hotels. This means a 16.4% decline in RevPAR translated to a 27.9% GOPPAR decline. For limited service, this ratio was 1.5, again faring slightly better. These ratios are typical of what we see each year; profitability growth is usually 1.5 to 2 times the RevPAR growth, or decline in this case. The March 2020 shows a GOPPAR decline of 101.7% based on a 65.6% RevPAR decline. This equates to the lower end of the range (1.5 times), illustrating that hoteliers have done as well as can be expected managing expenses during a difficult time.

The positive news for the industry is that we’re already seeing the weekly U.S. RevPAR results beginning to improve, albeit slowly. RevPAR data for the week ending 25 April shows RevPAR down 78.4%, an improvement from the 83.6% decline two weeks earlier. Demand and occupancies are also slowly moving in the right direction. 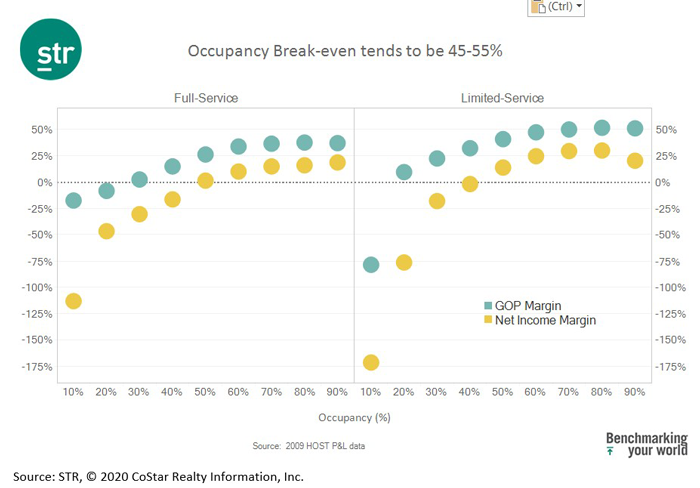 It will still be some time before hotels start to turn profitable again, based on the 2009 data. The chart above illustrates average profit margins based on occupancy that year. The March 2020 data shows an average occupancy of 31.5%, which based on the chart, would indicate full-service GOP just breaking even. That holds up well, as the average GOP margin for March was -2%. The GOP break-even occupancies are approximately 35% for full service and 25% for limited service. For net income, those levels are even higher (55% for full service and 45% for limited service). These net income figures are most important to owners right now, especially smaller owners with large debt service payments to cover.

When demand starts to return to the industry in large numbers, profitability will recover as well. Though 50% occupancies seem like a far-off, distant hotel industry utopia at the current moment, those levels are easily achieved in most conditions. So while the profitability levels of the past several years seem to be long gone, the industry will be able to get back to profitability sooner rather than later.