Occupancy has long been one of the key hotel performance metrics measured by STR. Reported on both a monthly and weekly basis, occupancy is easily calculated by dividing rooms sold (demand) by rooms available (supply), providing a straightforward representation of the percentage of rooms occupied during a given time period.

However, even this traditional metric has not escaped the impacts of COVID-19. Voluntary and mandated hotel closures have caused a fundamental shift in the way we record and report supply, and thus, a new occupancy metric has been born.

In normal times, and in alignment with USALI guidelines, STR records hotel supply as the property’s total number of rooms multiplied by the number of days in the month. While the latter half of this equation changes each month, the former rarely does—the total number of rooms cannot be altered monthly. Hotel openings, permanent or seasonal closures, and extended renovations are among the exceptions to this rule.

From early February in China and mid-March in the rest of the world, staggering numbers of temporary hotel closures followed in the wake of COVID-19’s spread. Some closures were government mandated, while others were voluntary and a result of drastically reduced demand or safety considerations.

The STR Standard methodology measures occupancy of all the open hotels in a market; it effectively tracks realized demand against realized supply and excludes temporarily closed rooms that could not be booked.

Ins and outs of occupancy 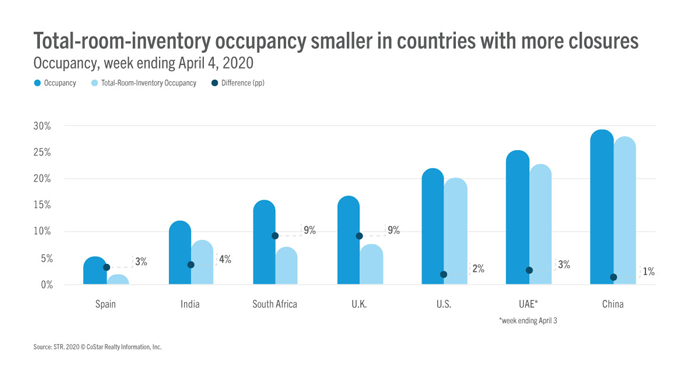 Until all temporarily closed properties in a market have reopened, Total-Room-Inventory occupancy will be less than occupancy, because its base (supply) is bigger. The size of the delta between these two occupancy measures can indicate the amount of hotel closures in a market as well as help assess market recovery. For example, given the historically low occupancy levels, larger deltas as seen in Spain and the U.K. indicate that most hotels in these markets were closed as of 4 April.

When to use what

While having two occupancy measures may be confusing, each methodology has unique use cases that allow a savvy operator to holistically understand performance in an unprecedented situation.

For example, open properties benchmark performance against STR Standard occupancy, because it allows an apples-to-apples comparison against other open competitors.

Closed properties can use STR Standard occupancy to gauge what their potential performance could be upon reopening and utilize the delta between the two occupancies to keep watch on how much of the market is open as well as a check on overall market demand.

For forecasting purposes, pipeline analyses, and to gauge the full impact of the COVID-19 pandemic on a market, Total-Room-Inventory occupancy is the more preferred metric among industry stakeholders.

As the pandemic is better contained and temporarily closed hotels reopen or close permanently, Total-Room-Inventory occupancy and STR Standard occupancy will converge once again into one metric. This is evident in China, where the difference between occupancy types is less than one percentage point. 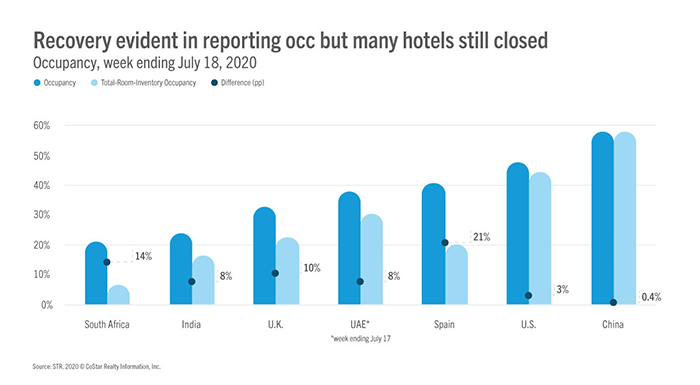 In the other six countries, the growing delta between the two occupancies suggests that while many hotels remain closed, demand has increased for open hotels, a positive sign for the hospitality industry. STR will continue to use both occupancy metrics to analyze and interpret COVID-19 impacts and recovery.