Ease your mind as you take to the skies with CableTV’s airline entertainment guide.


Heading home for the holidays or making a much-needed escape? Not all in-flight services provide in-flight entertainment—which can mean the difference between sitting in your seat anxious and bored, for hours, or feeling well-rested and energized after catching your new favorite movie.

As TV and movie lovers, we ranked US-based airlines on their in-flight amenities like Wi-Fi, entertainment consoles with movies, and more. For details about the rankings and our sources, check out our full methodology.

For the best in-flight entertainment, JetBlue checks nearly all of our boxes, and Delta isn’t far behind. Fortunately, most airlines provide enough amenities to keep you distracted—with three major exceptions. 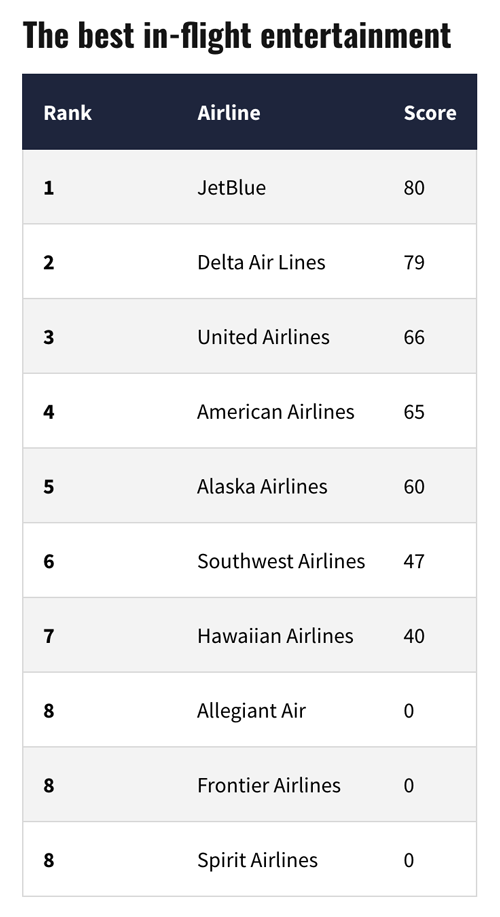 Allegiant Air, Frontier Airlines, and Spirit Airlines may charge cheaper fares to get you to your destination, but if you want to stay entertained, make sure to download any music, movies, or games to play offline—or bring a book! These airlines don’t provide in-flight entertainment like the others.

What can you expect from in-flight entertainment? 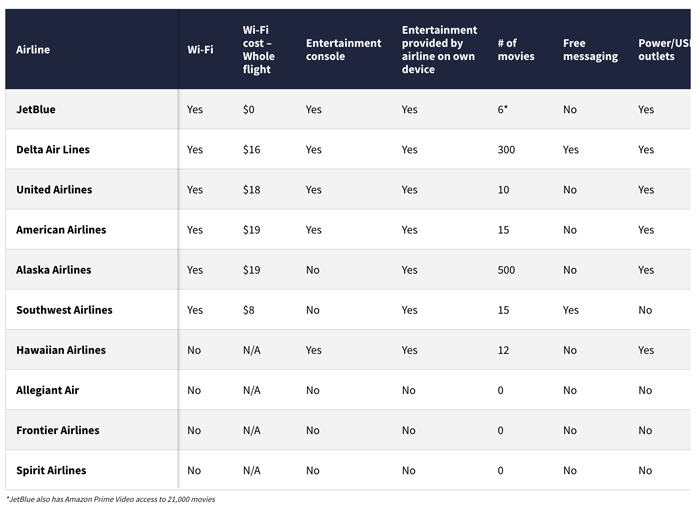 JetBlue offers free Wi-Fi, entertainment consoles, entertainment for your personal device, six movies (and access to an in-flight Amazon Video app with over 21,000 titles), power and USB outlets, and music. You won’t have free messaging, but you can find plenty of ways to stay connected to your contacts with free Wi-Fi.

JetBlue doesn’t offer any games, but you’ll get cozy seats and plenty of legroom, snooze kits with eye masks, brand-name food and drink options, earplugs, and plenty of live DIRECTV channels to surf too.

The only downside to Delta’s in-flight entertainment is that Wi-Fi costs $16—but even without internet access, you’ll have access to over 300 movie titles, free messaging (no Wi-Fi purchase required), music, games, and power/USB outlets.

United Airlines covers most of your basic entertainment needs along with DIRECTV channels and $18 Wi-Fi access, but it doesn’t include free messaging like Delta does. United has also joined the trend of offering more personal device entertainment with United Private Screening.

American Airlines has an entertainment console with around 15 movies in rotation, music, power/USB outlets, live sports, news, and games. You can also access entertainment on your device, but Wi-Fi costs $19 per flight. Plus, domestic flights offer free AppleTV+ with your purchase of Wi-Fi.

Alaska Airlines boasts the most in-flight movies (excluding JetBlue’s Amazon Video access) out of any airline. However, Alaska doesn’t provide an entertainment console, so you’ll have to watch those movies from your device (which doesn’t require Wi-Fi because the content is hosted on board the plane’s servers).

Alaska Airline’s free messaging doesn’t require a Wi-Fi purchase either, but for other stuff like social media scrolling or article browsing, the $19 Wi-Fi access fee is a bit steep.

It’s never a bad idea to bring a book or something else to do on your journeys, but having access to TV, movies, music, and games makes a big difference if you forget, or if you just want to zone out while you’re flyin’ high. With three exceptions (Allegiant, Frontier, and Spirit), most airlines provide plenty of in-flight entertainment.


Copyright 2021 CableTV. All rights reserved. From https://www.cabletv.com. By Trevor Wheelwright.