Consumers Warm Up to Facial Recognition to Keep Them Safe, but for Marketing and Advertising, No Thanks

Most of this activity is undertaken in the name of safety and security, but it is also raising major red flags among privacy advocates. They argue that the technology—which can scan and identify faces without consent in crowded streets, retail stores and sports stadiums—is predatory and invasive.

Among consumers, the jury is still out. People appear to be warming to the use of facial recognition in situations where they think it can keep them safe. A June 2019 survey by Pew Research Center found that 65% of US adults trusted law enforcement agencies to use the technology at least somewhat responsibly. These sentiments were higher among older, white and Hispanic demographics. 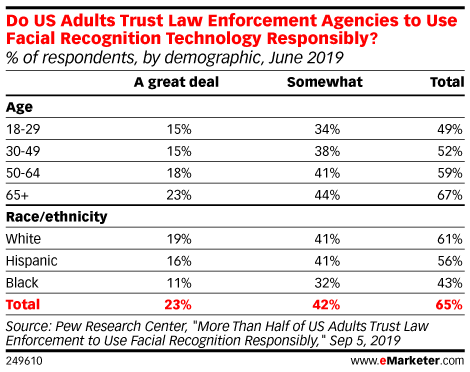 However, they are drawing the line at most other uses of facial recognition, especially by the private sector. Just 36% of respondents agreed that it was acceptable for apartment landlords to track people’s comings and goings from their buildings, and 30% said the same for companies tracking employees’ attendance, per Pew Research Center. But, a majority (54%) agreed that it was not acceptable for advertisers to use facial recognition to gauge people’s reactions to public ad displays, and just 18% of respondents trusted advertisers in any situation to use the technology responsibly. 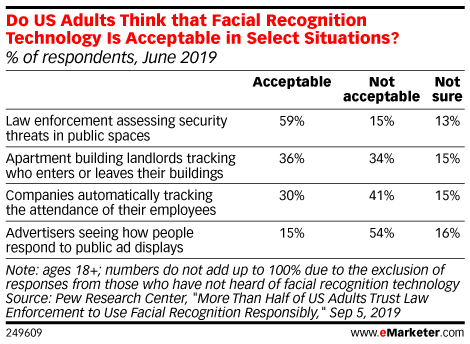 These findings are consistent with previous research. A September 2018 survey conducted by The Brookings Institution found that US internet users were reasonably open to safety-focused uses of face identification in airports, stadiums and schools. However, just 27% of respondents had favorable views about its use in retail stores to prevent theft. 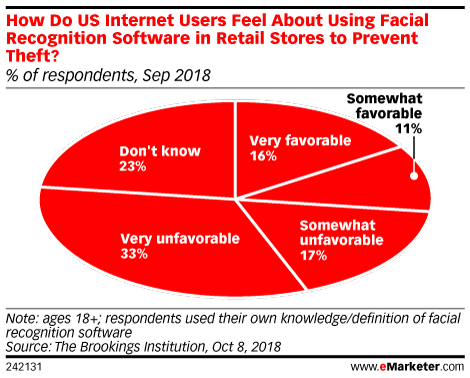 Another study, conducted in 2018 by Gartner, found that more than 70% of US and UK consumers felt comfortable with AI analyzing their vital signs and identifying their voice and facial features to keep transactions secure. However, 52% of respondents were not comfortable with AI analyzing their facial expressions in an attempt to understand how they felt, and 63% did not want AI to take an “always-on” listening approach to learn more about them.

The use of facial recognition and other biometric data outside of law enforcement has significant potential, but companies using biometric data—especially for marketing and advertising—run the major risk of alienating and driving away consumers. They can, however, take the first steps toward future success by being transparent with consumers and cultivating their trust.