Roughly 64,000 Rooms Remain Closed in US


Much is still unknown about how the hotel industry will recover from the COVID-19 pandemic, but data is helping paint a picture of a recovery in which labor, market segmentation and profitability will all play factors.

"This is not a normal type of recession," said Isaac Collazo, vice president of analytics at STR, CoStar's hospitality analytics firm, during a general session titled "Plotting the path to recovery" at the Hotel Data Conference.

Monitoring hotel occupancy has been key in tracking the recovery, he said.

The number of hotels with occupancy at 60% or greater has been increasing over the summer months amid a surge in leisure travel demand, he said. 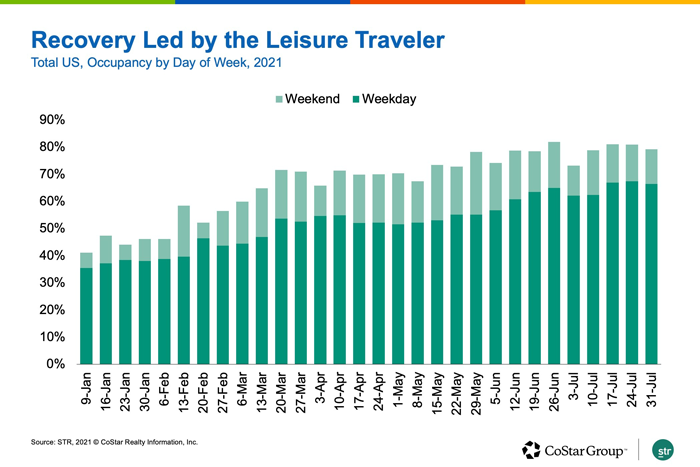 "This is not to say that we won't see some changes over the next several weeks, but, overall, hotels have done pretty well over the last six to eight weeks," he said.

Ali Hoyt, senior director of consulting at STR, said it's no surprise that hotel demand has been driven by leisure travel, which is evident in comparing weekday versus weekend occupancy.

"We know the leisure traveler has been fueling the recovery, but we really need those business transient travelers to fill those midweek hotel rooms, particularly after Labor Day," she said.

Not only have leisure travelers been boosting occupancy, they've also helped pump up rates, Collazo said.

Indexed to 2019 and adjusted for inflation, average daily rate has been at 2019 levels for some time, he said.

Hoyt said one of the bright spots in recovery is even though luxury hotels have been operating at a much lower occupancy than normal, rates have consistently been surpassing 2019 levels during 2021. 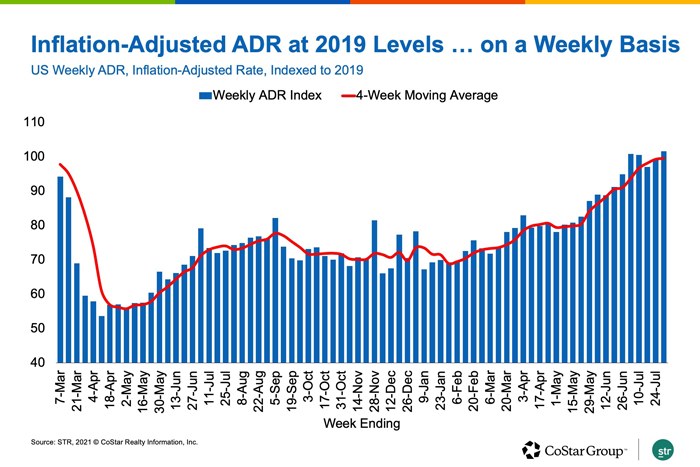 STR's Market Recovery Monitor places the industry and individual markets in one of four categories, based on revenue per available room comparisons to 2019: depression, recession, recovery and peak.

Collazo said the industry has been in recovery mode over the summer months, but he warned against measuring the recovery by weeks or months, noting it's going to be a years-long process.

Historically, RevPAR recovery has taken 23 quarters, from trough to peak, on a seasonally adjusted basis, he said.

It's important to look at the industry in aggregate, and also at the market level, he said. 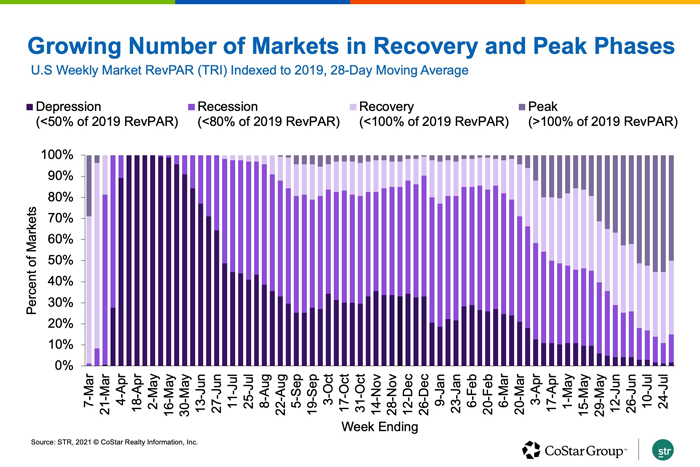 In the 166 STR-defined markets, some hotels have achieved higher RevPAR in recent weeks than they did in 2019.

"There's also a fair amount that are in recovery, and there's very few which are in depression," he said.

Hoyt said hotels in urban and gateway markets continue to struggle, while Florida and those in the Western part of the U.S. are reporting healthy gains. Airport and urban submarkets are less than 50% back to 2019 RevPAR performance, based on a trailing-12-month basis.

"In the hustlers, this is about 31% of all our reporting [hotels]. What we found is these hotels, they hustled, they were fantastic in 2019, way above industry average — and they're still fantastic in 2021," Collazo said.

Characteristics of the "hustler" hotels include being between 10 and 20 years old, medium-sized, upscale and upper midscale, and suburban.

On the flip side, the "laggards" were underperformers in 2019 and continue to be in 2021. These assets tend to be older, small- to medium-sized and in the midscale and economy classes.

"This doesn't mean every hotel in the midscale, economy class is in this group. This is on a hotel-level basis," he said.

While only making up 7% of all reporting hotels, group hotels are having a disproportionate effect on the hotel industry's performance.

"It's all about occupancy right now for group hotels. We need group demand to come back to these hotels to really push the occupancy and, therefore, RevPAR recovery," Hoyt said.

Both total occupancy and RevPAR for this cluster are sitting at about 60%. On average, about 4.5 million group room nights are missing on a monthly basis compared to 2019.

That's "still a significant way to go to recovery for this cluster of group hotels," she said.

The recovery also depends on resolving a labor shortage thathas hit the leisure and hospitality sector the hardest.

Approximately 6 million fewer people are employed in the U.S. than in February 2020. Of that 6 million deficit, 2 million, or about 30%, are in the leisure and hospitality sector, according to data from the Bureau of Labor Statistics.

Within hospitality and leisure, labor in accommodations through June was down roughly 27%, Collazo said.

"We do have a real issue in our industry. It was difficult before the pandemic — now we're really playing the catch-up game," he said.

Hoyt said total labor costs are still 54% below the year-to-date period in 2019.

Oxford Economics projects U.S. employment to return to 2019 levels by the end of next year.

"Hotels have a lot of open positions and can't hire at the same levels they would like to," Hoyt said.

"We have seen a strong return in total revenue and gross operating profit, which is encouraging to see at this point so early into our recovery on a monthly basis. Both of those metrics are at about 84% of pre-pandemic levels," she added.

The big, lingering question is when the recovery will be complete.

Hoyt and Collazo listed some factors that will determine when the industry can declare a full rebound.

It will require more than just RevPAR fully recovering to its pre-pandemic peak, Hoyt said.

"First, we saw a historic number of hotel closures on a temporary basis last year. We think it will be important for all those rooms to be reopened," she said.

As of the week of Aug. 14, roughly 1% of U.S. hotel rooms — 64,000 — remain temporarily closed, with nearly half of those rooms in New York, Orlando and San Francisco.

That number has dwindled from the peak of the pandemic in April 2020, when nearly 1 million rooms were temporarily closed.

RevPAR index on a trailing-12-month basis is at about 60% of the pre-recession peak.

"This is nominal RevPAR ... with the rise in inflation, it will be really important to attract that metric, as well, as we progress through the next few years," she said.