An analysis of hotel performance in relation to transit station proximity shows that performance generally declines as distance grows, but there are other factors to keep in mind, too.


CoStar Group, the parent company of STR, tracks information about all types of real estate, their attributes and their performance. In a recent webinar, CoStar’s Senior Consultant Juan Arias discussed the rent premium that can be achieved when multi-family units are located close to transit stations.

Transit stations in this context are simply defined as public transport stations for trains, light rail and subway. 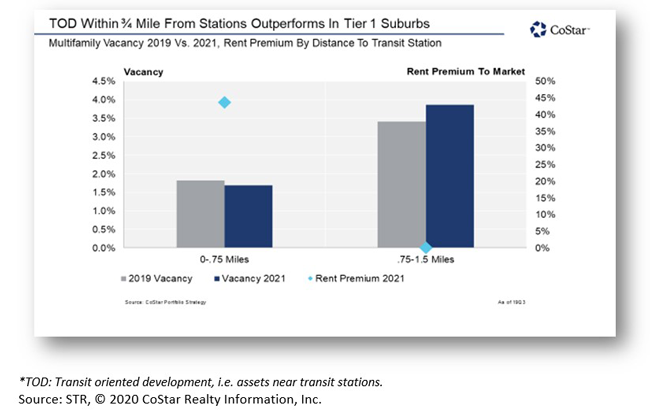 Clearly there is a rent premium and lower vacancy for apartments in transit-oriented development. So, distance to transportation matters to renters, and they are willing to pay a premium for easy access.

We took this chart as a starting point to seek to understand if similar patterns can be found in hotel performance metrics in the top 25 U.S. markets.

Our research is clear: there are both occupancy and rate premiums for hotels that are closer to transit stations. It is, of course, impossible to make a statement about causality. It is possible that transit stations are simply in larger urban areas, often downtown, and downtown hotels often charge higher rates. Be that as it may, being near a transit station certainly does not hurt performance. 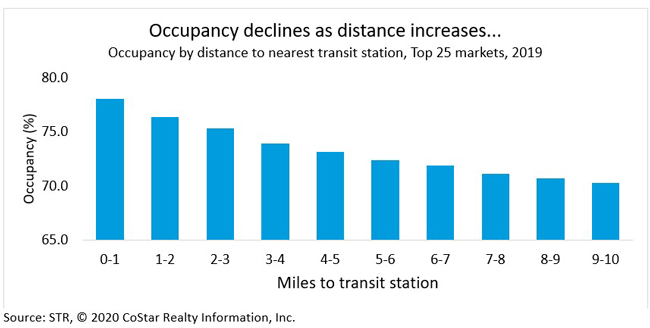 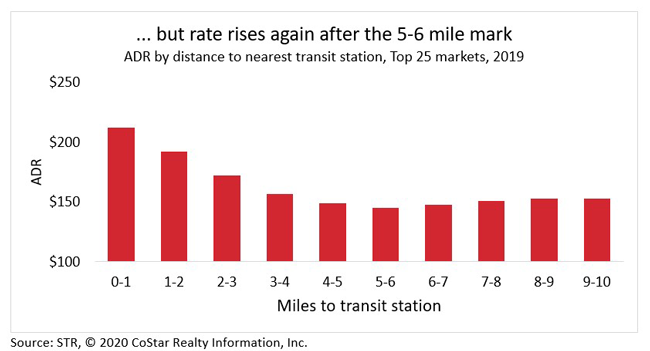 An increase in distance from one to two miles led to a 1.7-percentage-point decline in occupancy and a $20.49 fall in rate. Broken down further, the first half mile out has similarly big implications. Increasing hotel distance from one-half mile or less to one mile led to a 1.7-percentage-point decrease in occupancy and a loss of almost $15 in ADR. In other words, we observe a rate and occupancy premium for properties built right at transit stations. 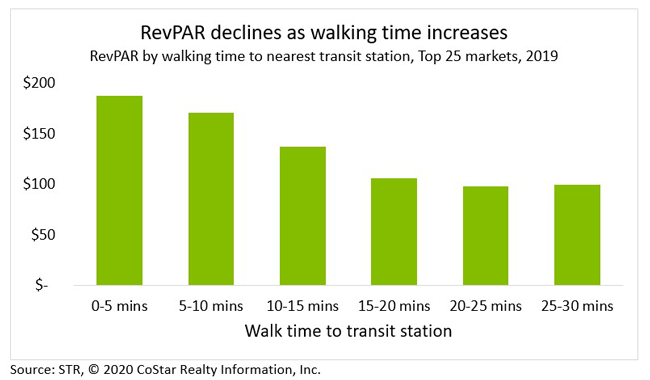 Hotel performance and transit station distance by class
Hotel class provides important context to performance. Of hotel rooms located within two miles of a transit station, 39.5% are in the upper upscale class, compared to only 3.3% in the midscale class. Higher-tier classes dominate areas closer to stations, with luxury and upper upscale classes controlling 51.6% of supply in those first two miles. The inverse is true as well. Of hotels located 28 to 30 miles from a station, a much smaller supply (9%) are luxury and upper upscale, while select service, upscale and upper midscale classes account for 54.5% of supply. 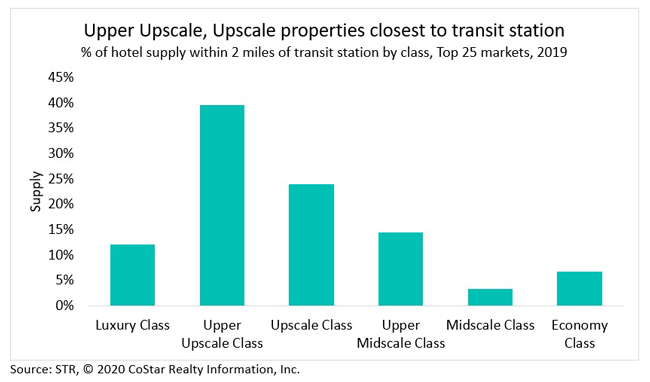 Can we replicate the ADR premium chart from the U.S. when breaking out the classes? The answer is: Not quite. 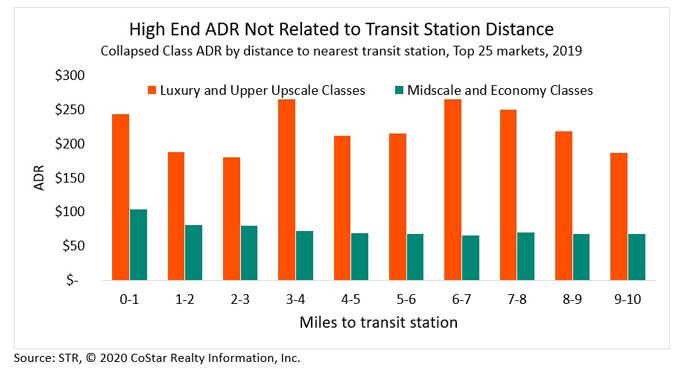 The ADR for midscale and economy properties is highest for properties closest to the transit station. The same pattern does not hold for the higher-end hotels.

It seems hard to discern any trend when relating absolute ADR to transit station distance. In some instances, ADR increases the further the hotel is away from the station. It is worth pointing out again that transit stations are not the only feature that is different for these hotels, and there are likely amenities that influence room rate much more than the access to public transit.

Typically, hotel performance analyses focuses on physical on-property characteristics, ranging from class to age to food-and-beverage options. However, external forces such as transportation are clearly just as important a part of a guest’s travel experience as the hotel. Properties located closer to transit stations, whether by minutes walked or miles traversed, outperform more distant accommodations in both occupancy and ADR, leading to sizeable revenue-per-available-room premiums for those closer to stations. However, this trend cannot be observed for all hotels and is most pronounced for limited-service hotels.

*Special thanks to Juan Arias, Senior Consultant, CoStar Portfolio Strategy for access to the transit station location file and the vacancy and rent premium chart.