There’s an adage in business that 80% of sales come from 20% of customers. This phenomenon – known also as “the law of the vital few” – may not be the universal truth that some suggest, but it does have pretty broad acceptance and application, and is viewed by many as a powerful tool for growing business.

Coincidentally or not, this principle applies nicely to the pandemic-induced lift that golf has experienced over the past five months, as it’s become pretty clear that a certain 20% of existing customers are contributing disproportionately to the outcome. (What follows begins to answer the question we’ve been asked more than any other in recent months: who’s driving the surge?)

Since March we’ve surveyed several thousand Core consumers, chronicling their sentiments and behaviors and drawing distinctions between different groups, time periods and locations. Within this pulse survey we’ve also inquired about current and expected 2020 golf spend, asking respondents to compare these amounts to 2019 and/or their “typical” annual spend. The data here is more directional than scientific/projectable, but it’s showed us that 20% of Core golfers will be “over-spenders” this year, while roughly 30% will be “same-spenders” and, believe it or not, half will actually underspend this year versus last (or typical). 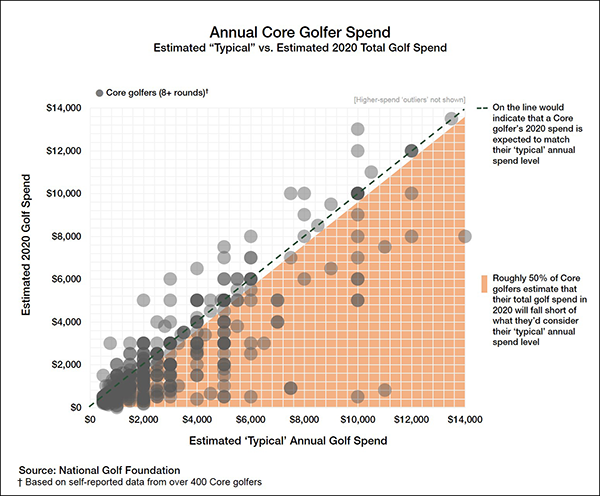 This increased spend among the 20-percenters – who represent 2.5 to 3 million golfers nationwide – applies to both equipment and rounds. Over-spenders are 44% more likely to have purchased a driver and/or set of irons so far in 2020 (despite entering the year with equal expectations to buy). And when it comes to rounds, they’re estimating an average increase of 37% for the year (compared to +23% for same-spenders and -6% for under-spenders).

So, who are these over-spenders, you ask? Well, two-thirds are under 50 years old and half are in households making $150,000 or more, which is about 1.5x and 2x more common, respectively, than the average Core consumer. This group is also 23% more likely to live in the Northeast and Midwest Census regions, which supports the state-by-state rounds increases we’ve detailed in previous weeks.

But perhaps the most obvious or expected difference is that this group of over-spenders appears to be a bit more serious about the pandemic. Compared to other Core golfers (8+ rounds annually), they’re:

All of these observations lead to two important points. The first is not new but worth revisiting – that golf and the pandemic have a bit of a synergetic relationship going, both broadly speaking and, more specifically, as it relates to the 20-percenters who are doing a lot of the heavy lifting. It seems the emotions they harbor towards the pandemic are stimulating some of this golf-crazy behavior.

The other point is about retaining and “leveling up” your best customers. Do you know your vital few? Their differentiating characteristics? How are you identifying, serving and rewarding this group? Finding look-alikes? We talk often about attracting new golfers, and there’s a tendency in business towards investing disproportionately in customer acquisition, but sometimes (maybe most times) the easiest source of new and sustainable revenue is right under your nose.