Internet Media's Share of U.S. Ad Spending Has More Than Tripled Over the Past Decade

The internet now accounts for half of all ad spending


In media spending, it’s the halves and the half-nots.

Internet media this year accounted for half - 49.6 percent - of U.S. ad spending, according to the December 2019 forecast from Publicis Groupe’s Zenith. The remaining half of spending was divvied up among TV and a shrinking pool of other media.

Ten years ago, the internet accounted for just 15 percent of ad spending, far less than what was spent on TV and newspapers.

TV is still very much in the game, though its share of the pie has fallen to 27.7 percent from 35 percent 10 years ago.

Out-of-home ad spending has held its own, capturing below 5 percent of spending in both 2019 and 2009.

Print media is a different story. Newspapers and magazines together accounted for more than one-third (34 percent) of U.S. ad spending in 2009 (and 50 percent back in the print-centric days of the early 1990s). This year, newspapers and magazines will get just 11 percent of the pie. That slice is only going to get smaller in the next few years. 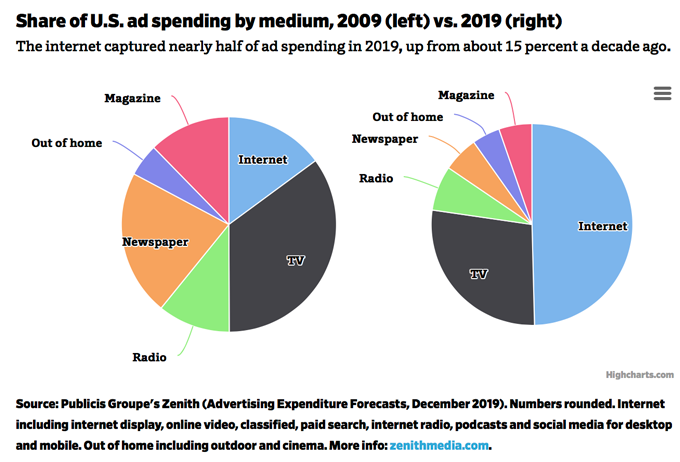 Copyright 2020 AdAge. All rights reserved. From https://adage.com. By Bradley Johnson.