Larger Hotels Continue to Weigh Down US Hotel Recovery


Any hotelier will agree the hotel industry is a street-corner business, and the pace of the U.S. hotel industry’s recovery from the COVID-19 pandemic has similarly followed that adage.

Occupancy and room demand increased from the previous week, but the gap between hotels in leisure markets and properties dependent on group business remains wide.

Nearly one fifth of all reporting hotels had occupancy above 90% during the week of June 20-26, but that is less than what was seen in 2019. A deeper look revealed that the percentage of hotels with occupancy below 60% is higher this year than what it was in 2019. That is due to the continued drag from large hotels — properties with 300-plus rooms — where weekly occupancy was 13 points lower this week than all other hotels. That trend continues to be a function of limited group and business demand. Excluding large hotels, weekly occupancy jumps to 72% and has nearly identical distribution to 2019.

Weekly room demand reached 26.8 million, indexing at 94% of the 2019 level, meaning weekly demand was down just 6% versus the comparable week two years ago.

We expect that June will produce more than 110 million room nights sold, the most since October 2019. Room revenues have also been a pleasant surprise and are predicted to be down just 10% from what they were in June 2019. Last week’s results added to the good news with most metrics reaching pandemic-era highs.

Occupancy for the week ending June 26 was 69.9%, which was the industry’s highest level in 88 weeks. Weekend occupancy — Friday and Saturday — soared to 82% and has surpassed the comparable period in 2019 twice over the past three weeks. This was the first time that weekend occupancy surpassed the 80% level since October 2019. 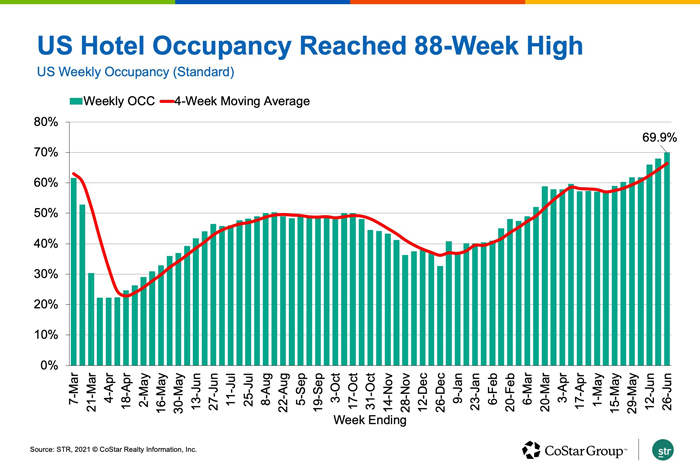 Not to be left out, weekday occupancy — Sunday through Thursday — advanced to 65%, which was also the highest level since November 2019. On a total-room-inventory basis, which accounts for temporarily closed hotels, weekly occupancy was 66.8%.

Weekly average daily rate — not adjusted for inflation — was essentially the same as it was in 2019, led by hotels outside the top 25 markets, where weekly ADR was at its highest level in history. Overall, 61% of all reporting hotels had a higher ADR this past week as compared to two years ago. On average, 77% of hotels in resort, interstate and small metro/town locations had a higher ADR this week than what they did in 2019. 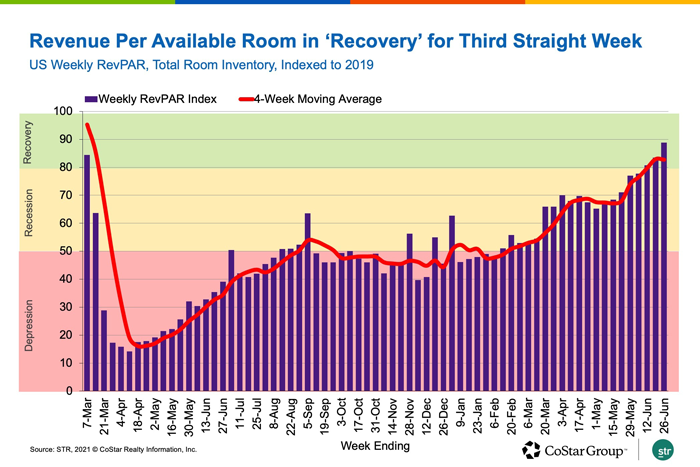 Seven markets remain in the “depression” zone, or when TRI RevPAR indexed to 2019 was less than 50. That, too, was unchanged from last week and continued to include Boston, Chicago, New York, San Francisco, and Washington, D.C. 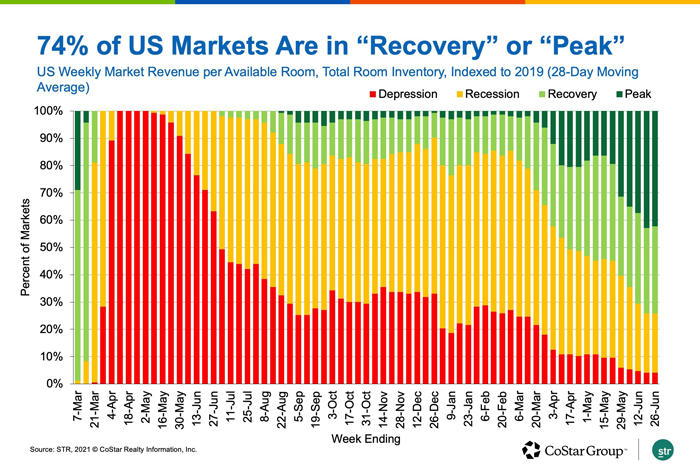 Of the 166 STR-defined markets, 75% reported weekly demand greater than 90% of their 2019 comparable, with 50% of all markets seeing higher demand this week than in the comparable week two years ago.

Among the 654 STR-defined submarkets, there are seven where demand is less than 50% of what it was in 2019, with four submarkets — Midtown East, New York; San Francisco Market St.; Minneapolis Central Business District; and Midtown West/Times Square New York — showing about 40% of the demand they reported two years ago. Weekly TRI occupancy among the submarkets ranged from 29% in Midtown East in New York City to 93% in Key West. Seventy-two percent of submarkets reported TRI occupancy between 60% and 70%.