Memorial Day Weekend Hotel Demand Highest Ever in US

With More Hotel Rooms To Sell, Occupancy Does Not Set Record


On the Friday and Saturday of Memorial Day weekend, the U.S. hotel industry sold more room nights this year than in any prior year, despite not setting a record for occupancy.

Weekend room demand was also the highest it has been all year. 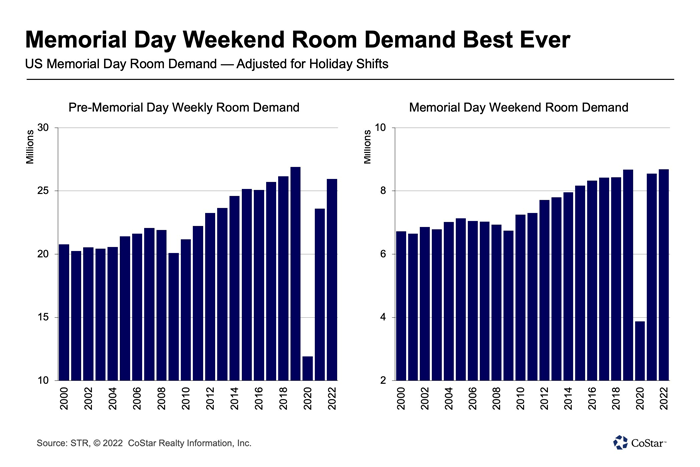 Occupancy for Friday and Saturday nights reached 78%; and the record for Memorial Day weekend, set in 2016, was 81.4% occupancy, according to data from STR, CoStar’s hospitality analytics firm. The record-setting room night demand, then, is a result of increased supply. The U.S. hotel industry in 2022 has 3.2 million more available rooms than it did in 2016; and supply is up 1.1 million available rooms from 2019.

For the week leading up to Memorial Day, U.S. hotel occupancy was 66.5% — down from 68.6% the previous week. The 2-percentage point week-over-week occupancy decline was the largest on record for the holiday period. Record occupancy for the pre-Memorial Day week was set in 2015 at 71.3%, which was nearly matched in 2019 at 71%. 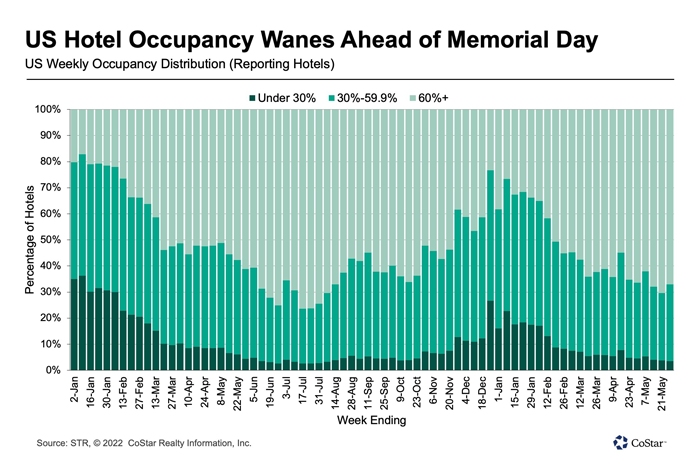 Supply also is a factor in these comparisons, of course.

Actual room demand — the number of room nights sold — was the third highest of any pre-Memorial Day weeks, just below 2018 and 950,000 less than in 2019. Additionally, room demand was the eighth highest since the start of the pandemic, and second best of the year.

Weekly U.S. hotel occupancy has been above 66% six times this year, compared to seven times during the entirety of 2021. None of those weeks in 2021 happened before the Memorial Day holiday.

Average daily rate for the week was down only 0.1% from the previous week, but due to the lower occupancy, revenue per available room declined by 3% week over week.

ADR remained well above the pre-pandemic level, rising to a 22% premium over 2019. It should be noted that this week compared to 2019 is somewhat non-comparable as the Memorial Day holiday was a week earlier in 2019. Accounting for the holiday shift, this year’s ADR was 13% higher than in pre-Memorial Day week of 2019. On an inflation-adjusted basis and accounting for the holiday shift, real ADR was equal to 2019.

At $152, weekly ADR was the fourth highest since March 2020. Adjusted for inflation, it was the seventh best since the start of the pandemic. Weekend ADR was $174, the second highest of the pandemic era. As compared to 2019 Memorial Day weekend, this year’s real ADR was 11% higher.

Weekly RevPAR was $101 — the fourth best since the start of the pandemic, but down 7% compared to the pre-holiday week in 2019, when accounting for the holiday shift. 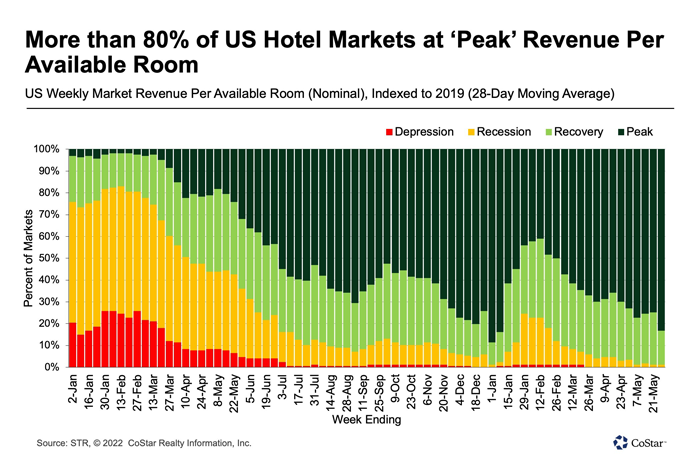 In the top 25 largest U.S. hotel markets, weekly occupancy remained above 70% for the third consecutive week, despite a decline from the previous week.

The Boston and Chicago hotel markets both reported their highest weekly occupancy of the pandemic era at 80.2% and 72.1%, respectively. Both markets also set pandemic-era records for weekday occupancy. 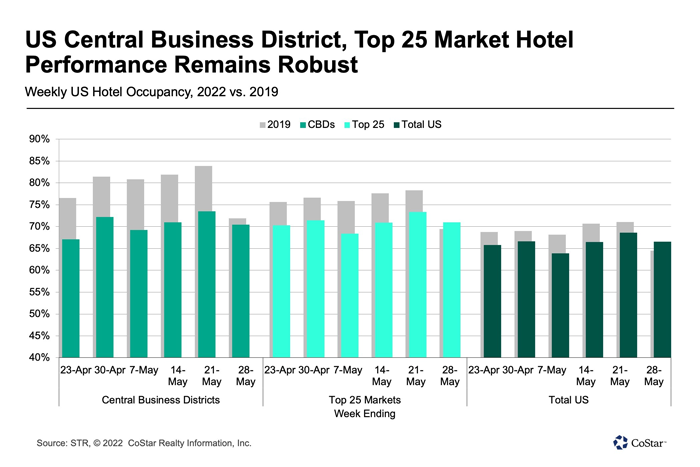