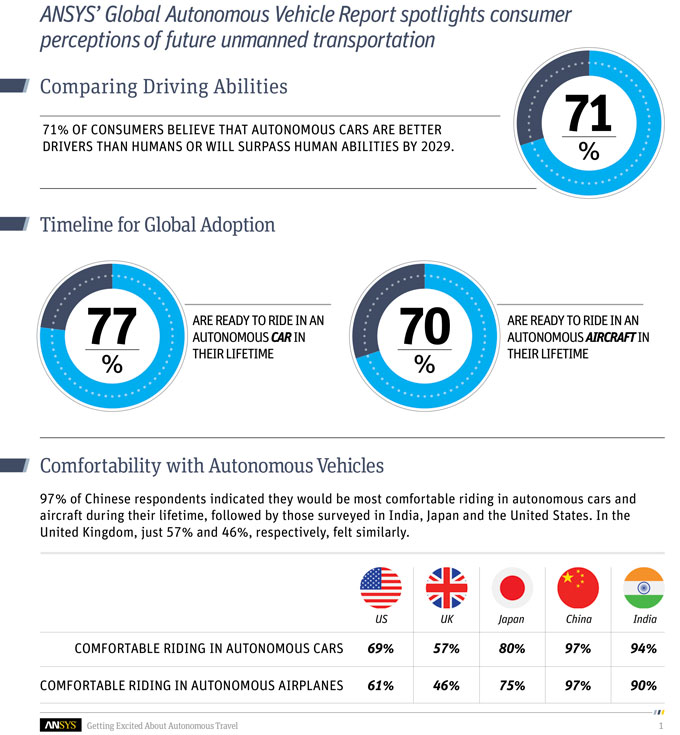 ANSYS commissioned the survey to gauge global consumer perception of AVs and better understand expectations for the future of travel. In June, ANSYS unveiled a snapshot from this study of public attitudes toward autonomous aircraft. Today's full release of the Global Autonomous Vehicles Report provides a more expansive analysis into public perceptions. The report confirms consumers have high expectations for autonomous capabilities and that consumers are comfortable with the idea of riding in autonomous cars and aircraft in their lifetime.

Highlights from the report include:

Autonomous cars require billions of miles of road tests across a vast number of driving conditions to ensure consumer safety, which cannot be accomplished in our lifetime with physical testing alone. Simulation greatly reduces the need for physical road tests and is the only way engineers can more quickly test thousands of AV travel scenarios, maximize the performance of sensors and perception algorithms and ensure safety.

"Automated driving has been a dream of engineers and travelers since at least the 1950s, but the hardware and software required to make it a practical reality has only approached a sufficient level of maturity in the past decade," said Sam Abuelsamid, principal research analyst, Navigant Research. "For automated driving to become a commercial reality that people trust for safe transportation, consumers will need to be convinced that algorithms can consistently drive more reliably than humans. That will require vast amounts of simulation testing to augment hundreds of millions of miles of real-world, on-road evaluation."

Designing AVs to satisfy stringent safety and reliability requirements presents a formidable challenge for AV manufacturers. ANSYS Autonomy, released this year, delivers an end-to-end, cost-effective capability for rapidly developing AV systems that satisfy these requirements. From software and algorithm development to functional safety analysis to sensor accuracy optimization, ANSYS Autonomy is critical for ensuring roads and skies are safer than ever.

"We are at the threshold of a fully autonomous era that will revolutionize global transportation. This report confirms the world's optimism – but also legitimate concerns – for AVs," said Eric Bantegnie, vice president and general manager of the systems business unit at ANSYS. "To drive worldwide AV adoption, manufacturers must prove the technology is safer and more reliable than humans. ANSYS simulation solutions make that possible."