New Designations Announced for the First Time since 2009

Established in 1991, the National Scenic Byways Program recognizes roadways with notable scenic, historic, cultural, natural, recreational, and archaeological qualities. Scenic America, a national environmental nonprofit that preserves and enhances the visual character and scenic beauty of America, led the charge to revitalize and restore funding for the program.

“The National Scenic Byways Program brings new jobs, tourism, and other benefits to communities along these scenic roads, which are often located in parts of the country where such resources are desperately needed and harder to come by. We are grateful to Rep. David Cicilline (D-RI), Sen. Susan Collins (R-ME), Rep. Garret Graves (R-LA), Sen. Ben Cardin (D-MD), and the nine Members who led the way to pass Public Law No. 116-57, The Reviving America’s Scenic Byways Act, making today’s announcement possible,” said Scenic America President Mark Falzone. “We are excited to partner with the new designees as they tap into the program’s benefits, and we look forward to helping other byways across the country in applying for future byways designations.”

Recognizing the potential impact of the National Scenic Byways Program on America’s travel and tourism industry and on its own scenic conservation mission, Scenic America took the lead to work with Congress to open a new nominations process and establish funding for the program. Through the leadership of Sen. Collins and Sen. Jack Reed (D-RI), Congress included $16 million in funding for the program in the 2021 Consolidated Appropriations Act enacted on December 29, 2020 – its first dedicated funding since 2012.

The program’s revitalization comes at a critical time for the travel and tourism sector as it contends with the devastating impacts of COVID-19 on communities that rely on a robust hospitality industry. In 2019 alone, travel and tourism generated $2.9 trillion in economic impact according to the U.S. Travel Association. Scenic byways contribute strongly to those figures. For example, the Blue Ridge Parkway generated $1.4 billion in economic output and supported 16,300 jobs in North Carolina and Virginia in 2019, according to the National Park Service. During the same year, the Natchez Trace Scenic Parkway brought $13.1 million in economic output to Alabama, Tennessee, and Mississippi, supporting 161 jobs. As Americans look for safe ways to return to travel, road trips and visits to parks and natural places are expected to have widespread appeal. 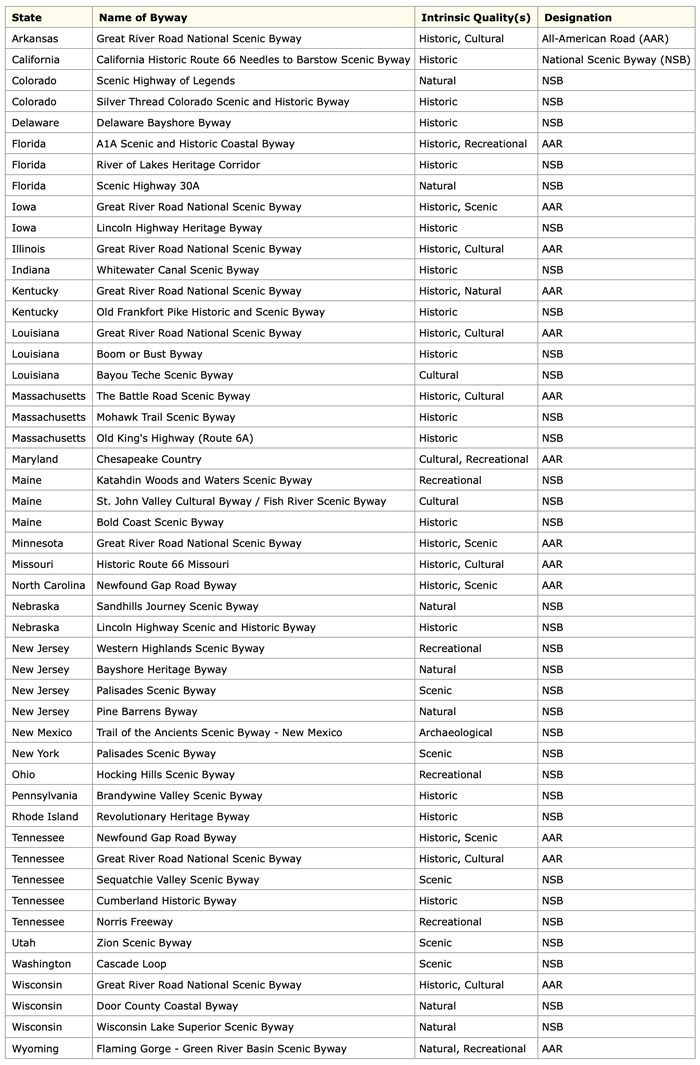