The U.S. hotel industry posted its highest demand and occupancy levels since the beginning of the pandemic during the week of April 4-10, according to STR‘s latest weekly data. Occupancy reached 59.7 percent, average daily rate was $112.22 and revenue per available room was $66.99.

Reflecting the country’s almost two-point improvement in occupancy from the previous week, more than 50 percent of properties posted a weekly occupancy above 60 percent. 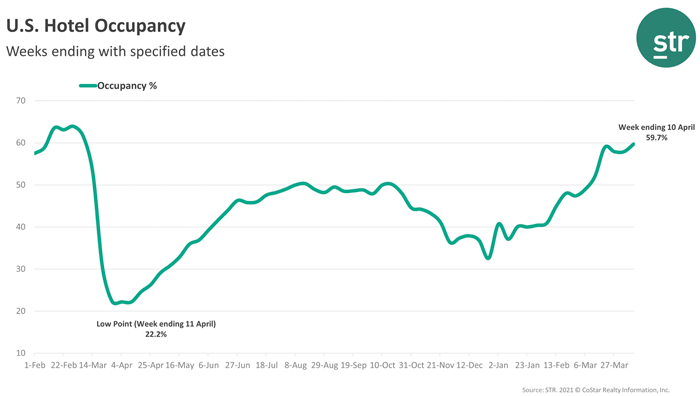 According to STR’s Market Recovery Monitor, the number of U.S. roomnights sold reached 22 million during the week, the most since the start of the pandemic. As a result, occupancy reached 59.7 percent, also the highest level of the past year.

On a total-room-inventory basis, which includes temporarily closed hotels because of the pandemic, U.S. occupancy reached 56.6 percent, another pandemic-era high. On average, the industry sold 3.2 million rooms per day during the week. A year ago, daily demand was a third of that. 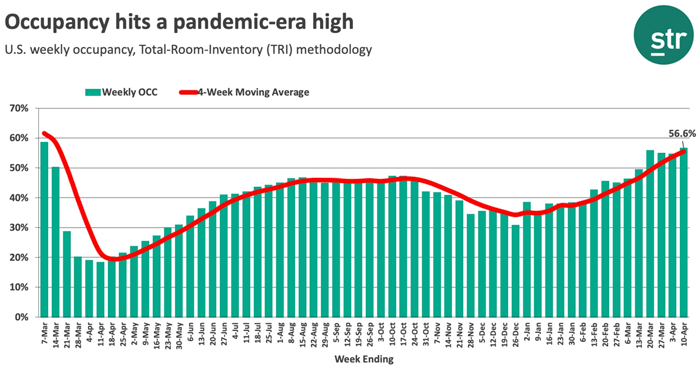 The gain in demand was widespread with all but 37 of the 166 STR-defined U.S. markets reporting room demand improvement. The week-to-week increase was led by Texas, where all markets, except McAllen/Brownsville, reported higher room demand. Other states leading the demand surge included South Carolina and North Carolina, where beach resort destinations like Myrtle Beach and Hilton Head continued to post higher demand. In fact, Myrtle Beach saw the largest increase of any market this past week.

Aggregate data for the top 25 markets showed slightly lower occupancy (57.5 percent) but higher ADR ($119.86) than all other markets.