STR: US Leads in Hotel Openings During Pandemic

As of 1 October, the U.S. opened 521 properties accounting for 55,395 rooms between the beginning of March and end of September.


The U.S. opened more hotels and rooms than any country between the beginning of March and end of September, according to global pipeline data from STR. At the same time, the country has shown significant growth in project deferrals and abandonments.

As of 1 October, the U.S. opened 521 properties accounting for 55,395 rooms over the seven-month period. Five additional countries have opened more than 2,000 rooms throughout the course of the pandemic.


Year to date through September, 211 projects in the U.S. were deferred, which is a 56% increase over the same period last year. Additionally, 232 projects were abandoned, which was a 16% decrease over 2019. 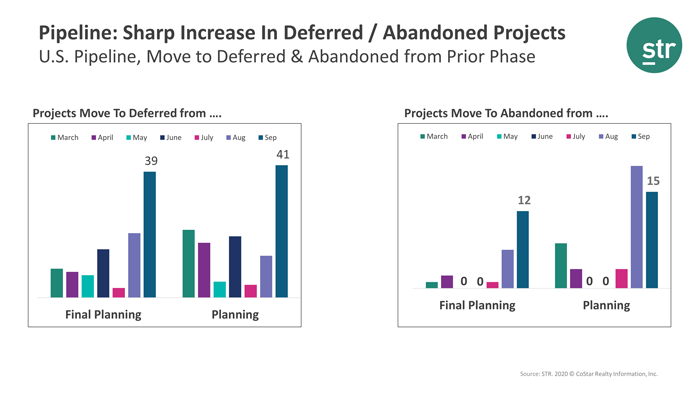 “Generally, projects that have already broken ground are going to be finished—but abandonments and deferrals, which are becoming more common, affect the total room count in the pipeline,” said Jan Freitag, STR’s senior VP of lodging insights. “The movement of projects into these phases is playing into the overall slowing of development activity because there isn’t that constant flow of projects moving into construction. Additionally, there is no longer a rush to move projects from planning to construction because the record-breaking demand of 2019 isn’t there waiting for new hotels to open.”