Toward the end of 2021, the effects of the pandemic were easing, stock markets were booming, and digital acceleration was moving full speed ahead. Today, the future looks much less predictable. Mounting inflation, the threat of a recession, the war in Ukraine, and persisting supply chain challenges are reshaping the purchasing journey, and subsequently, the way businesses communicate with their consumers.

Tech giants, ad agencies, and brands are all preparing for an industry-wide downturn—but how severe it will be is unclear. Drawing insights and statistics from Insider Intelligence’s latest report series, “The Era of Uncertainty,” we explore three main factors influencing the advertising and marketing industry as it braces for a rocky H2.

1. Consumer spending is in flux

Accelerated inflation is causing consumers to reevaluate their spending. Although we expect US consumers to continue spending despite the rising costs of goods—with retail sales set to grow 6.4% this year,primarily due to inflation—a closer look at shopping habits and purchases tell a more nuanced story.

Eroding spending power is forcing consumers to make tougher choices about what and how they buy, especially when it comes to non-essentials and splurge items. Spending on durable goods fell 3.2%, as consumers pull back from big-ticket products such as furniture. In addition, to cover the costs, consumers are increasingly tapping into savings. The savings rate inched up to 5.4% after falling to 5.2% in April, its lowest level in more than a decade.

“These buying trends and insights will be a crucial signal for advertisers looking to adjust their spending. If consumer spending continues to lose steam over the next several months, it would suggest there isn’t a market to support current levels of ad spending,” says Peter Newman, senior forecasting analyst at Insider Intelligence.

2. The battle between advertisers and Big Tech carries on

The economy’s turn has only made the rocky relationship between Big Tech and advertisers worse.

Big Tech’s advertising outlook was already reeling from widespread privacy changes, such as Apple’s AppTrackingTransparency policy (ATT). Under ATT, all apps distributed through the App Store must prompt users to opt in and allow advertisers to track them across other sites or apps. The rollout of ATT in April 2021 effectively eliminated the primary way publishers and advertisers track users on iOS and changed how the mobile ad industry approaches monetization and measurement.

As a result, advertisers no longer receive information about off-platform actions, making it difficult to target ads effectively, track engagement, and measure conversions. In fact, Meta said the changes could cost it as much as $10 billion in 2022, and its failure to create a reliable replacement has caused advertisers to flee Facebook. That’s also why Insider Intelligence predicts Meta will see its lowest ever annual growth rate of ad revenues, increasing just 12.4%.

Facebook isn’t the only platform to be hit hard. Snap said it would miss its Q2 revenue goals, bringing down the stocks of other ad-reliant social media giants. Following this announcement came a domino effect of layoffs, hiring freezes, and abandonment of new projects across the industry.

Now, more than a year after Apple’s privacy changes, companies are still struggling to develop ad solutions, and revenues have dropped significantly. Luckily, advertisers using Facebook and Instagram are in a stronger negotiating position than ever before. Meta is going to fight hard to keep its advertisers in the fold, but there’s no better time than now for marketers to spread their social budgets around to other platforms—especially when TikTok is knocking on the door with new performance-focused ad products.

Besides social channels, there are still several proven, growing sectors for ad dollars to move to. US search ad spending will grow 14.5% this year to about $99 billion. More direct channels have also proved resilient. Email marketing remains a stalwart tool for marketers to build personal relationships with consumers and increase the effectiveness of their campaigns during a time when other channels are plagued by uncertainty. 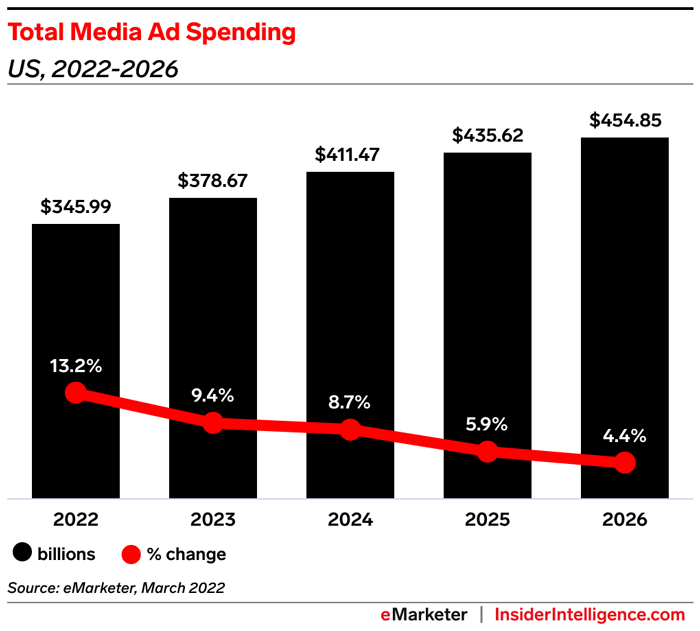 Consumer spending figures will be a crucial signal for advertisers looking to adjust their spending.

3. Agencies and brands are scaling back

Tech’s woes are just one small part of the ad industry’s overall downturn. Layoffs have hit several ad agencies, and major advertisers are starting to rein in spending.

With the US economy adding 390,000 jobs in May this year, the nation’s employment outlook is positive overall. Yet, at the same time, advertising and public relations still lost 2,400 jobs, according to the US Bureau of Labor Statistics. It was the first employment decrease in the advertising industry since November 2020, a sign that the boom brought on by the pandemic is slowing down.

“Rising interest rates from the Federal Reserve have coincided with tumbling stock prices, especially in the tech sector,” says Newman. “Cutbacks could include reduced advertising budgets. For now, most cuts seem to be in future-oriented speculative ventures or in overbuilt capacity from the pandemic,not in ad budgets, which can have a direct line to revenues.”

Upper-funnel campaigns such as connected TV (CTV), which had previously benefited from the pandemic-driven trend toward streaming, have seen some of the biggest budget cuts. This comes, however, amid criticism of accuracy, with the recent finding that 17% of ads on CTV devices air while TVs are off, costing advertisers $1 billion. If the economy’s unstable outlook continues, ad channels that already had issues—like CTV—will be impacted the most, as marketers look to put their tighter wallets to use on more reliable sources.