Passenger screenings surpassed 800,000 in one day for the first time since March on August 9th. A week later, on August 16th, the TSA again notched over 800,000 travelers. While this is still a new milestone, the slow growth in passenger numbers indicates that it is still a long way until the TSA screens over one million passengers in a day.

Since late July, it has been clear that the US aviation recovery was going to be choppy. In June and July, US airlines grew their schedules. American Airlines led the charge when, in early June, it started to rebuild its schedules with a plethora of domestic and international route resumptions and growth. Most other airlines followed with United announcing about 25,000 more flights for August.

However, as July progressed, a worsening viral situation made airlines reconsider their schedules and pare back in August. Plus, Hawaii’s reopening was delayed, which would have been a big boon for airlines. 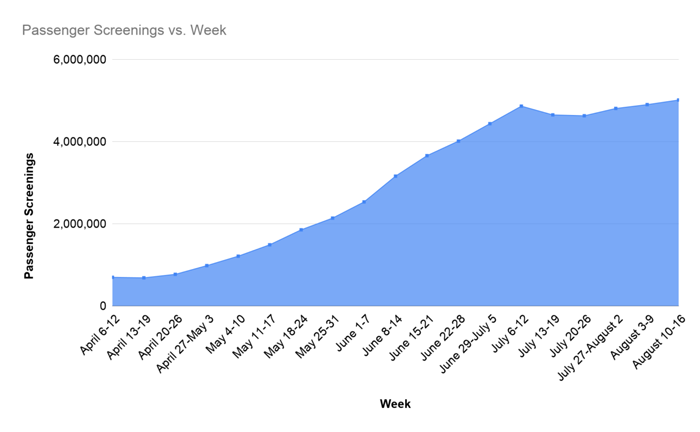 So, after hitting their peak in the July 4th weekend, growth stalled and decreased. As you can see from the graph, while there is some growth, it is far less now than it was back in June.

Here’s where US passenger counts stand now when compared to 2019: 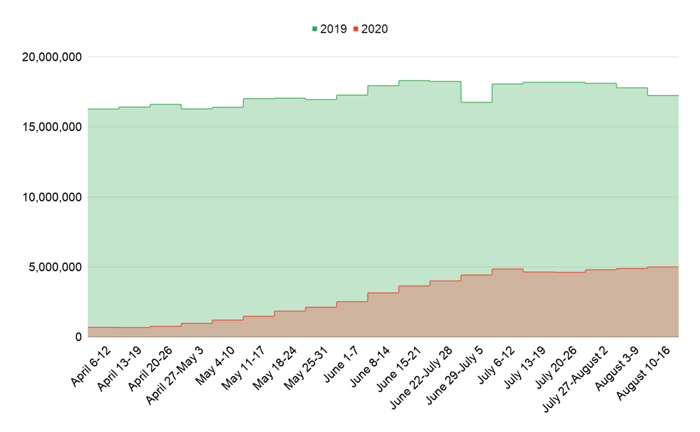 So, essentially, while this last week saw the TSA cross five million screenings in a year, these numbers are still only about 30% of what the TSA saw back in 2019.

Here are weekend passenger numbers in 2020, again showing that growth now is quite minimal: 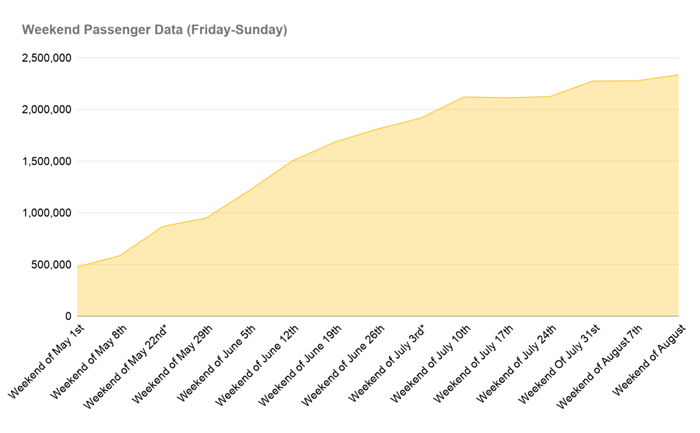 Since the Independence Day holiday, Tuesdays and Wednesdays have seen minimal, if any, improvements in passenger numbers week-to-week. This shows that, while there is a rebound, it’s isolated amongst leisure travelers and still a tough situation for airlines.

One million passengers a day feels far away

The milestone of one million passengers in one day is still a while away. The next most likely candidate for a one million daily mark would be the upcoming Labor Day holiday on the first Monday of September. However, with some schools having already started up by then, there’s usually less of an appetite for travel when compared to another major holiday like the US Independence Day on July 4th.

As it stands now, it seems unlikely that the US crosses one million passengers a day for a few months. Perhaps the Thanksgiving or Christmas holidays could get the US there. However, if there is not enough travel demand then to hit a million passengers a day – which depends largely on the trajectory of the public health situation – then it is probably going to be summer 2021 when the TSA records over one million screenings in a day.

How are airlines reacting?

Most airlines are taking a conservative approach. However, all airlines are flying more capacity now than they have passengers to tap into – which is not necessarily bad. For example, Delta, JetBlue, Southwest, Alaska, and Hawaiian Airlines are all limiting the sale of middle seats or else putting in place other capacity restrictions.

In these cases, an airline’s load factor really only stands at around 60-70% at most. So, while more people are traveling now than they were in June, the airlines that have committed to keeping middle seats open are adding less capacity than some of their peers.

Other airlines like American and United are booking their flights to capacity. Even then, their schedules are far lighter than they were in 2019, and their load factors are still pretty low. United, for example, anticipated a 45% load factor back in July.

As for size-wise, all airlines are planning on being smaller through the winter. This includes retiring fleet, furloughing employees, and making network adjustments. Mostly, these airlines will be flying less in October than they are now just because the market dynamics change in the fall once schools and universities reopen, the cold weather starts to set in across much of the US, and there are fewer holidays available for people to pack up and take a trip.

With business travel also incredibly low, which has led carriers like JetBlue and United to embark on a point-to-point expansion to leisure destinations, there also will not be that staple to fill up planes, leaving every airline in limbo as to what October will look like. Needless to say, the current trajectory shows that just about no one will be turning a profit this year.