Fewer Americans traveled by air in 2021 than in any year in Gallup records between 2003 and 2015, largely because of reduced travel by employed adults. At the same time, those who did fly continued to make multiple airplane trips within the year, albeit a bit fewer than in prior years.

Thirty-eight percent of U.S. adults polled in a Dec. 1-16 Gallup survey reported they had taken at least one trip on a commercial airliner in the past 12 months. That's modestly lower than the percentages Gallup found in December measurements from 2006 to 2015, when between 43% and 48% reported traveling by air in the past year. Before that, from 2003 to 2005, the figure was closer to today's level, at 40% to 41%.

The percentage of Americans traveling by air in 2021 was depressed among employed adults, at 41%, down from 54% in 2015. The current figure is the lowest for employed adults in Gallup's trend.

By contrast, the percentage of nonworking adults who report traveling was steady at close to a third -- 34% in 2021 versus 33% in 2015. This is comparable to the rate for nonworking adults in most years since 2003. 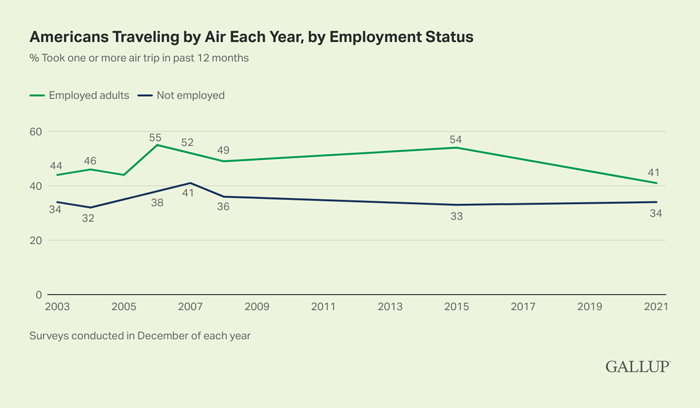 Gallup did not ask this question in 2020, thus missing what certainly would have been a record low in self-reported air travel amid the business shutdowns and extreme social distancing that occurred at the start of the pandemic. According to the U.S. Transportation Security Administration (TSA), the number of passengers traveling through airport security plunged at the start of the pandemic, from over 2 million daily to below 100,000. Consistent with Gallup's trend, TSA data show that travel increased markedly in 2021, although it has not been fully restored to its pre-pandemic level.

Historically, Gallup measured the percentage of Americans traveling by air as part of surveys focused on public satisfaction with air travel or perceptions of air safety. However, with reduced air travel emerging as an important economic issue during the pandemic, Gallup asked the question again in December, in order to have a pandemic reading on the rate of U.S. commercial air travel that can be compared with pre-pandemic trends.

The question asks respondents to estimate the number of trips they took on a commercial airliner in the past 12 months, counting each round trip as one trip. The 38% reporting in December that they flew in the past year includes 23% who took one or two trips, 7% who took three or four, and 8% who took five or more. All of these percentages are down slightly from the prior measurement in 2015.

While Gallup doesn't probe respondents about whether their air trips were taken for work or personal reasons, it is likely that major corporate cutbacks on employee travel that occurred during the pandemic account for the decline among employed adults.

Americans as a whole took an average 1.4 air trips in the past 12 months, which is down from 2.1 in 2015. This decline partly reflects the increase in people making no trips, from 55% to 62%. However, it also reflects air travelers flying less, with the average number of flights they report taking each year declining from 4.6 in 2015 to 3.6 in 2021.

Longer term, the average 1.4 trips made by U.S. adults and the 3.6 made by air travelers are below average and the lowest Gallup has measured, but still roughly tied with the prior lowest readings in Gallup's trend since 2003, recorded more than a decade ago.

Among 2021 air travelers, the average number of trips that employed and nonworking adults have taken in the past 12 months is within the normal historical range for both groups.

Commercial air travel remains subdued during the pandemic, a fact already clear from TSA and other airline industry reports. The Gallup data reinforce that a reduction in business travel is likely most responsible for the decline; personal travel, although less common, appears to be holding up better.

And in a promising sign for the airline industry, those who are traveling are taking multiple trips. While not quite as frequent as in 2015, the number of flights consumers report taking in 2021 was at the low end of the normal range recorded in the 2000s. In other words, rather than returning to air travel warily, once people decide it's safe to get back on a plane, they are likely to resume something close to their normal travel pace.