US Hotel Industry Continues to Gain Ground Toward Recovery


Seventy-three U.S. hotel markets, 44% of the 166 U.S. markets, posted “peak” or “recovery” performance for the week of April 3 — the most since COVID-19 was declared a pandemic in March 2020, according to the latest weekly data from STR, CoStar Group’s hospitality analytics firm. 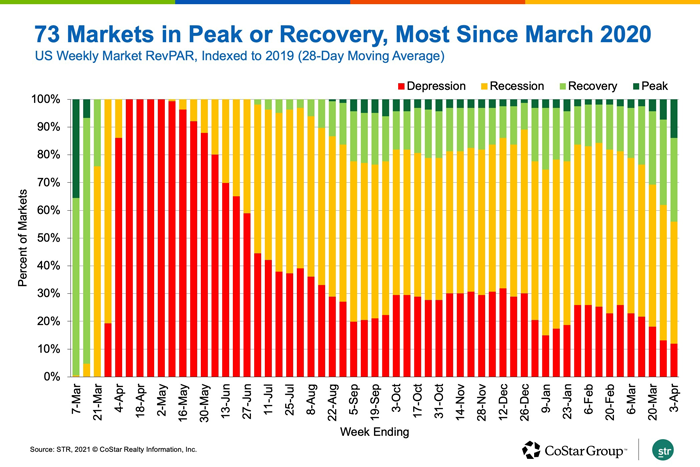 The “Market Recovery Monitor” places the industry and its markets into one of four categories, based on ratios achieved by dividing current RevPAR performance against performance in the comparable week in 2019:


Ratios of 100 or more outperformed the benchmark, and below 100 underperformed.

Weekly revenue per available room, a key performance metric, was $65.34 — 73.1% of the level posted for the comparable week in 2019, and a 4.2% increase over the previous week. Weekly RevPAR has increased in all but three weeks in 2021. 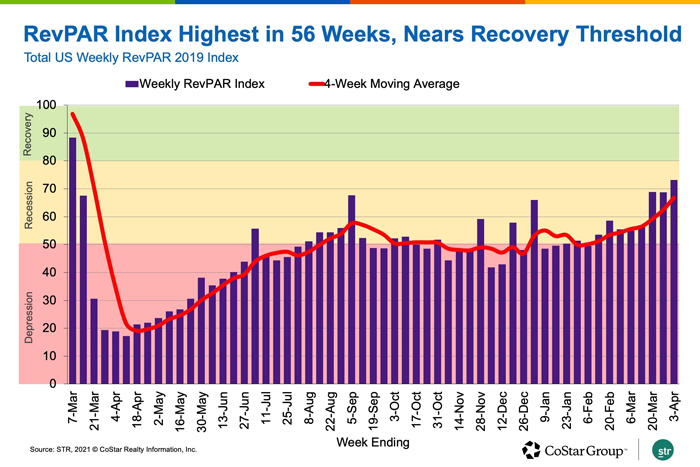 Lagging performance in the Boston, New York, New Orleans, San Francisco and Washington, D.C., markets — all of which were in the “depression” category for the week — dragged down the U.S. Top 25 markets, which still improved overall to enter “recession” territory for the first time of the pandemic era, according to the STR index.

Top 25 markets represent the largest chunk of U.S. markets in the “depression” category – meaning they had the lowest RevPAR index compared to the 2019 benchmark.

According to STR’s total room inventory methodology, which assumes all available hotel rooms are open, U.S. hotel industry RevPAR for the week was $61.76 — a 3.7% increase over the previous week — with 67 markets in the “recovery” or “peak” categories.

U.S. hotel demand for the week increased and stood at more than 21 million rooms sold for a third consecutive week. The weekly demand level ranked 10th highest of the past five quarters.

U.S. hotel average daily rates were also at the highest level of the past year, led by hotels in the luxury and upper-upscale class, which achieved rates that were nearly in line with 2019 levels.

Globally, most markets remain in the “depression” category with RevPAR at 39% of levels achieved in the comparable week in 2019. Occupancy was 30% on a total-room-inventory basis among the 351 global markets, excluding the U.S. 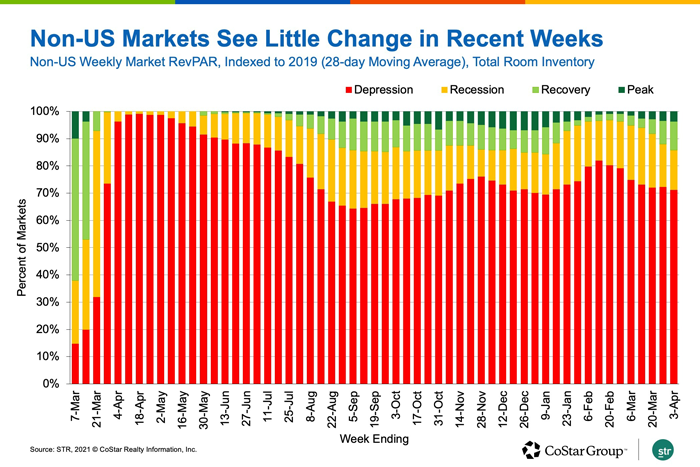 Markets that Stood Out

Demand in the Top 25 markets hit a pandemic high, boosted by gains in Orlando, San Diego and Washington, D.C. — which led all U.S. markets in demand growth.

Weekly U.S. hotel occupancy increased slightly, but remained below pandemic-era highs achieved two weeks ago. Overall, more U.S. hotels posted occupancy below 30%, and fewer had occupancy above 60% for the week. 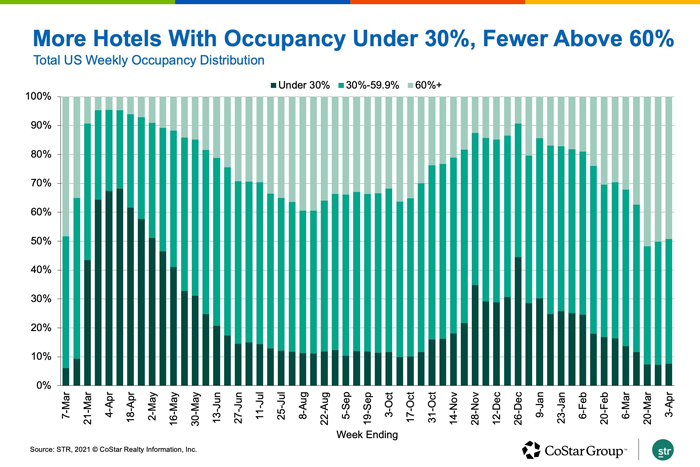 Weekend hotel occupancy, which for the two prior weeks surpassed 70%, was 66%. However, weekday occupancy was at its highest level since March 2020 — 54.7%.

Top 25 markets overall achieved the highest occupancy level of the past year, with all but six posting weekly gains. Tampa — and all but three Florida markets — surpassed 2019 occupancy levels.