The U.S. hotel industry neared 50% occupancy in the latest weekly results as leisure travel began to reemerge from a post-holiday hibernation.

Weekend hotel occupancy grew by 3.5 percentage points to 56.6%, which lifted total U.S. hotel industry occupancy for the week ending Jan. 29 to 49.7%. The weekday occupancy percentage was unchanged from the previous week, at 46.9%, which is an indication that the improvement was a result of leisure travel demand as business travel continues to lag. 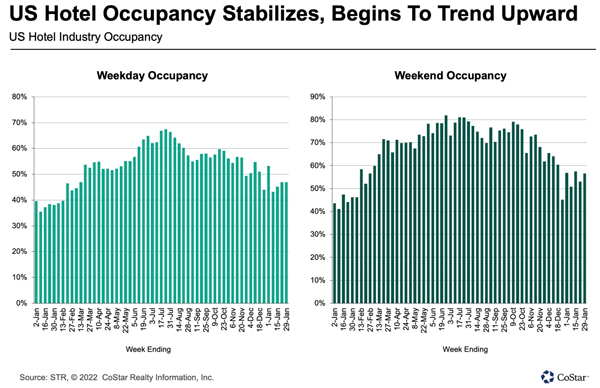 After hitting a 33-week low, TSA security screenings trended upward this past week, indexing at 76% of 2019’s level.

Performance trends have indicated that business travel demand has taken the brunt of the impact from the spread of the omicron variant of COVID-19, as companies delay return-to-office plans, trips and events. The hope is that as omicron has proven to be more mild than the delta variant, the worst of that impact on travel has passed and business travel should pick up.

Rising hotel occupancy in the 25 largest U.S. markets supports that.

Week over week, top 25 market hotel occupancy advanced a full percentage point to 50.5% — the first time in four weeks that it has been above 50%.

However, like the national average, the growth came mostly from weekend occupancy, which climbed to 58.3% as weekday occupancy fell. Shoulder days, Sunday and Thursday, also contributed to the occupancy growth in the top 25 markets and for the industry overall.

Occupancy also increased at large hotels, with 300 or more rooms, to 42% on average, but those hotels in urban markets dragged down the average, with occupancy in the mid-30% range for a third consecutive week.

Large urban hotels in five submarkets — with at least four large hotels — topped 50% occupancy for the week, led by the Tampa central business district, where this hotel type achieved 75% occupancy.

For a fourth week, airport hotels had the highest occupancy of any location type, followed by resorts. Resort occupancy has surpassed 50% over the past two weeks and has gained nearly two percentage points in each of the past two weeks, confirming that leisure travel is beginning its return.

U.S. hotel industry average daily rate barely moved during the week. Hotel rates over the weekend were up 1% over the previous weekend, but ADR on the weekdays was down 0.6%, canceling out most of that weekend gain.

ADR was up 1.8% on average in the top 25 markets, but down in most other markets. Weekday ADR in the top 25 rose for a third consecutive week, up 1.9%, as weekend rate advanced 1.4% after dropping in the previous week.

Compared with the same weeks in 2019, weekday ADR in the top 25 markets has been about 10% lower over the past two weeks. Outside of the top 25, weekday ADR decreased by more than 2% but remained slightly ahead of what it was in 2019 — as it has been in 18 of the past 20 weeks.

Revenue per available room increased 2.2% in the week. In the top 25 markets, weekly RevPAR was up by nearly 4% from the previous week. However, indexed to 2019, top 25 market RevPAR is about 30% lower, but that index improved for a second consecutive week.

Total U.S. RevPAR was 86% of what it was for the same week in 2019 — the highest index since the first week of January. 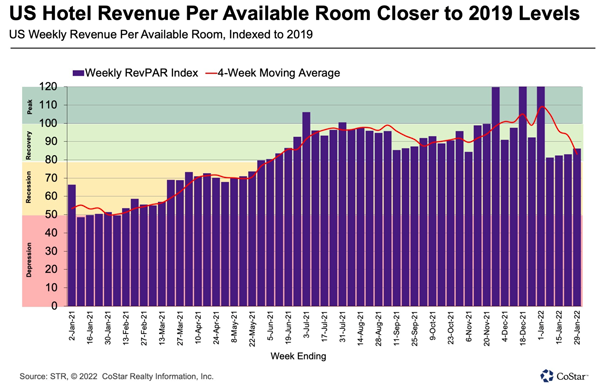 Over the past 28 days, RevPAR was 83% of 2019 levels, down from an index of 93% last week, with 75% of markets in either “peak” or “recovery.” The decline in the 28-day figure was expected as the previous weeks included strong performance during the holidays. Adjusting for inflation, 66% of markets were in those two categories over the past 28 days. 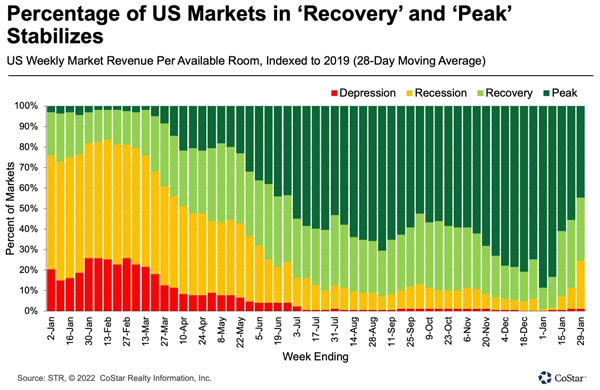 For a seventh consecutive week, the Florida Keys led the U.S. hotel markets with 83% occupancy; and Florida had seven markets in the top 10 markets for highest occupancy in the country. Of the 13 Florida markets, only two were below 60% for the week: Orlando and the Florida Panhandle. The former is enduring ongoing weakness in group demand, and the latter is in a post-holiday lull. Overall, statewide occupancy in Florida was just below 65% for the week — behind Arizona, which was a half percentage point higher.

Gatlinburg/Pigeon Forge, Tennessee, had the weakest occupancy of any market for the week and has been at or near the bottom for the past three weeks, alongside Myrtle Beach.

Of the 166 STR-defined markets, 57% reported occupancy below 50% for the week. A week ago, 64% of markets were below the 50% level, with a similar percentage in the week before that. Only 13% of markets had weekly occupancy at or above 60%. 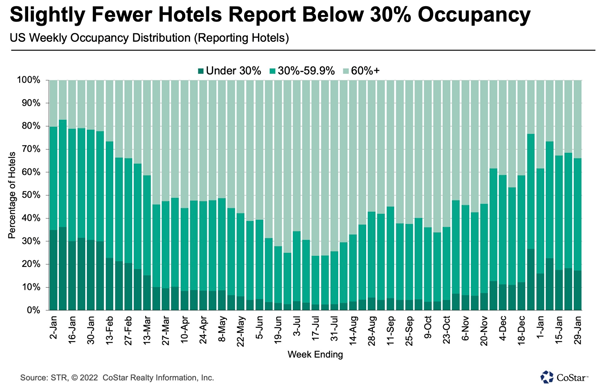 Central business districts in the top 25 markets continued to suffer as occupancy remained weak at 39.3%, up 0.5 percentage points from the previous week.

Surprisingly, ADR for central business districts was up 4.9% week over week, driven by double-digit growth in Atlanta, Denver, St. Louis and Washington, D.C.