US Hotels Could Have a Better Fall Season Than Expected


In a sign that fall U.S. hotel performance could be slightly better than expected, the U.S. hotel industry posted its best performance in a month, according to the latest weekly data from STR, CoStar’s hospitality analytics firm. 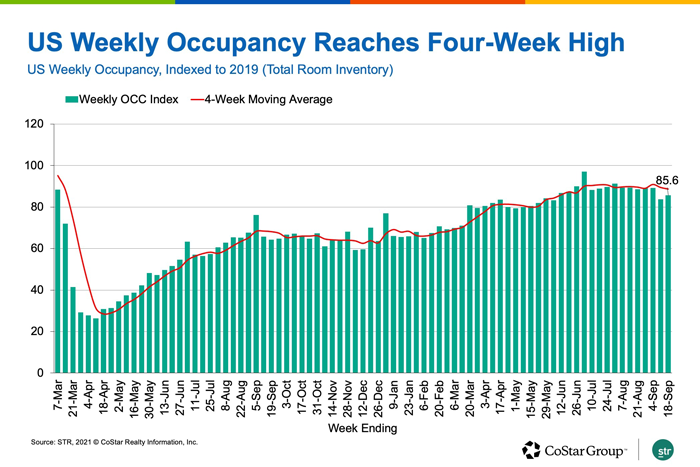 Weekly demand was 90% of the pre-pandemic 2019 level, as hotels sold 24.3 million rooms, an increase of 1.2 million rooms sold the previous week and the largest weekly gain of the past nine weeks. During the same week in 2019, U.S. hotels sold 27.1 million rooms.

Subdued demand was expected for the week due to the midweek observance of Yom Kippur, but demand actually increased in 84% of all U.S. markets. Compared with the same week in 2019, which was free of any holidays and religious observances, 73% of markets reported demand that was 90% or more of the 2019 level. Even against somewhat more difficult comparisons, the weekly 2019 demand index to 2019 rose by 2.2%, the best weekly gain in 11 weeks.

According to STR’s Market Recovery Monitor, the U.S. hotel industry remained in “recovery” for the 15th straight week, with revenue per available room, on a total-room inventory basis that accounts for temporarily closed hotel rooms, that was 84% of the level achieved in the same week of 2019. The index to 2019 increased 0.8 points from the previous week. 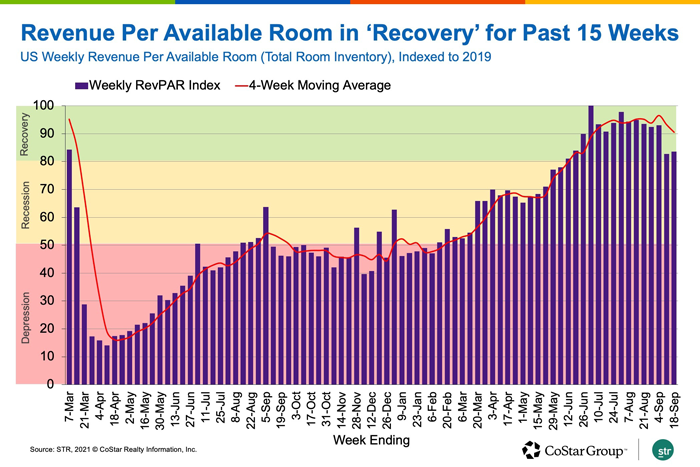 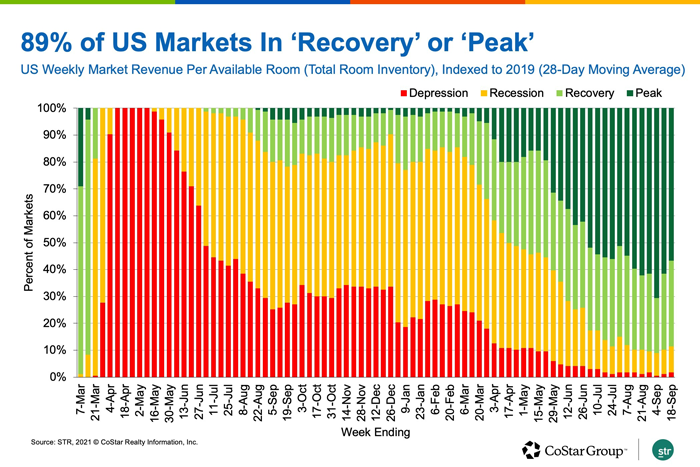 San Francisco’s hotel market continued to have the lowest total room inventory RevPAR index to 2019, as it has for nearly the entire year.

On a 28-day moving total basis, 89% of markets were in “recovery” or “peak,” down from 90% last week. The percentage remains high on that basis given the strong summer gains observed in many destination markets.

U.S. hotel occupancy was 63% for the week. Daily occupancy advanced every day of the week except Sunday, culminating in a level of 78% on Saturday. That level was the second highest of the past seven weeks and was only surpassed by the Saturday ahead of Labor Day.

At the hotel level, 62% of all hotels reported weekly occupancy surpassing 60%, with most above 70% and a quarter above 80%. 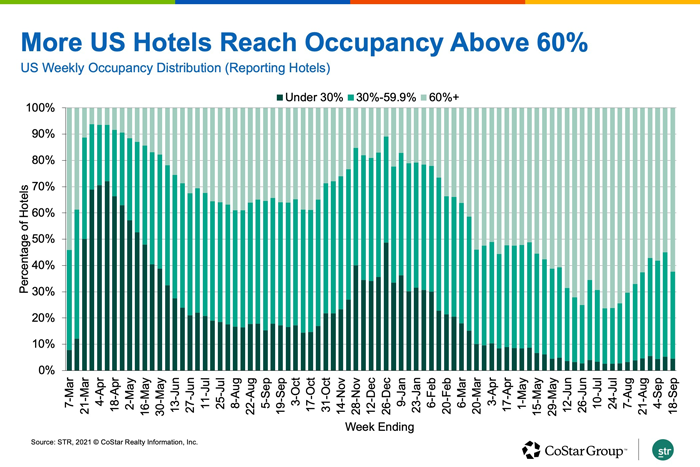 Upscale and upper-upscale hotels achieved the largest demand gains in the top 25 markets, accounting for nearly 60% of the weekly growth. Occupancy at group hotels advanced by nearly two percentage points for a second straight week, reaching 48%, the highest level since mid-August.

Weekly average daily rate was essentially flat from the previous week, and was down 3% from the same week in 2019. It was the second straight week in which ADR indexed lower than the 2019 level. Adjusting for inflation, weekly ADR was down 8% compared to 2019.

At luxury hotels, weekday ADR was down 0.8% from the previous week, while upper-upscale grew ADR by 0.6%. Midscale and economy hotels each reported weekly ADR declines of 3%.

Overall, compared with three weeks ago, industry ADR is down 1%, driven by a 2.6% decline in weekday rates especially in leisure destinations that experienced strong summer gains. However, in top 25 markets, weekday ADR was up 3.2% from three weeks ago.

New York City weekday ADR was up 25% compared with the week of Aug. 28.