US Markets Get Biggest Bump in Demand Over Weekends

Leisure, drive-to demand is propelling strong weekend performance in U.S. top 25 markets, as well as some submarkets, but week-over-week demand increases are slowing.


Data from STR shows that weekend performance is striking back at U.S. hotels across all classes while week-over-week demand increases are slowing.

STR is the parent company of Hotel News Now.

During a “Turning weekday/weekend data into wins” webinar presented as part of the Hotel Data Conference, Rico Louw, senior client account manager for North America at STR, said demand is still heavily from drive-to travel, including to locations with beaches and wide-open spaces.

To help visualize this trend, STR pulled data from 10 top occupancy markets in the U.S. for the week ending 11 July. All sold “more than seven rooms out of 10.” Four were beach destinations and six were open-space markets, he said. 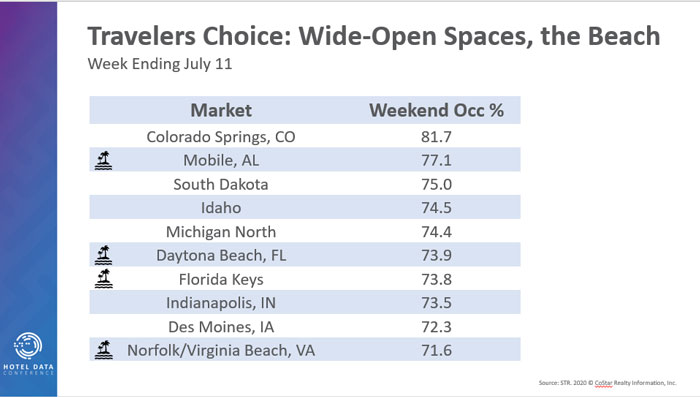 Louw said the slowing pace of week-over-week demand from April is “alarming to watch” but more data is needed to show this trend.

“COVID-19 changes very fast so the industry behavior will fluctuate with it,” he said.

Multiple markets with beach destinations showed occupancy above 90% this year, he said.

From luxury to economy, five out six of the classes recorded occupancy growth of between 10% and 12% in weekday versus weekend data, he said. The economy class also reported increases in weekend business but only by about half the point difference of the other classes. 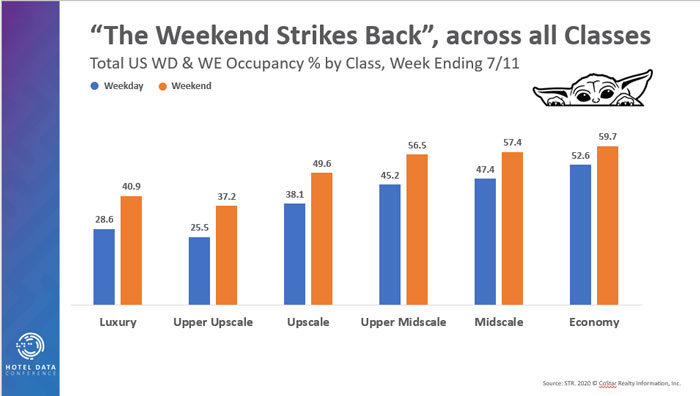 Louw said STR believes the extended-stay segment is being widely used by healthcare workers, which narrows the gap between week and weekend performance.

Luxury hotels outperformed in average daily rate, he said. The difference between weekday and weekend ADR in the luxury class for the week ending 11 July was double that captured in the upscale and upper-midscale classes—or limited service. “There’s quite a gap between the sequence into the other classes,” he said.

Luxury hotels reported a weekday-to-weekend ADR difference of $26. The average difference for other classes was $8.40. Properties that rely on meeting space and group sales are feeling the void the virus has created, he said.

“Luxury is seeing a demand and a rate that has benefited (from) the leisure business that is happening right now. Those drive-to markets especially are seeing that demand visit them,” he said.

As expected, hotels in urban markets or near airports have been most negatively impacted by the pandemic, data shows.

“Urban locations are still seeing the lowest occupancies for both weekday and weekend,” Louw said. “Contributing to the airport location (performance) is travel bans and mandates, even precautions, which is making it hard for them.”

All other locations—suburban, interstate, resort and small metro/town—are currently reporting stronger weekend demand. Occupancy has been higher on weekends than weekdays.

Among the top performers are resort locations, which have the largest gap between weekday and weekend data, he said. This could be related to the trend in drive-to, leisure travel.

For the week ending 11 July, resort markets led in difference between weekday and weekend rates. 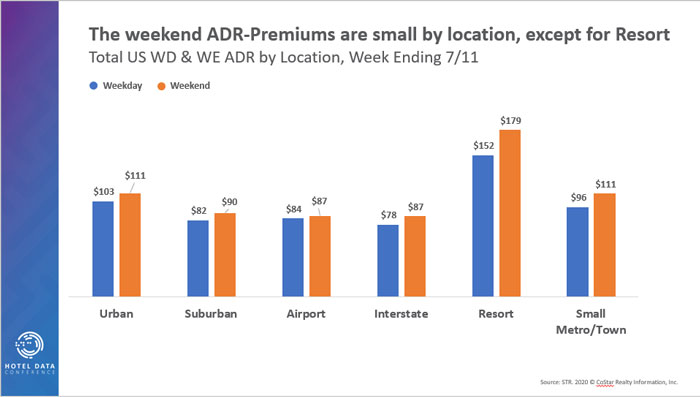 Weekend ADR for the Savannah Historical District came in above $140 for the week ending 11 July, he said.

Louw noted that even though these smaller markets recorded a spike in weekend performance, it was still below the data recorded in 2019. 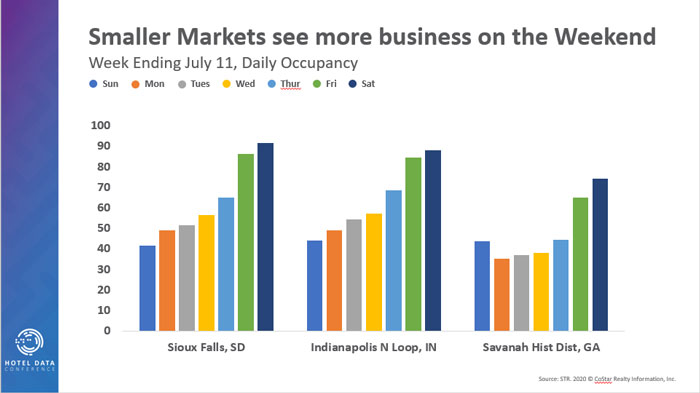 “They still showed a negative percent change,” he said.