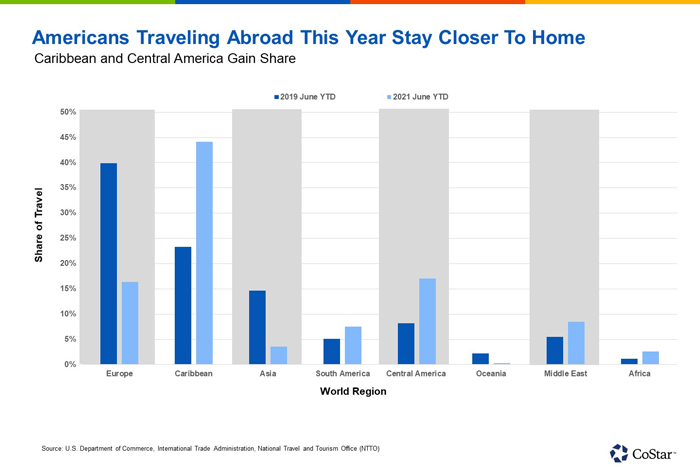 U.S. residents have taken 18.4 million trips outside of the country through June of this year, a far cry from the 48 million trips they took in the first six month of 2019. And as infection rates both here and abroad have increased because of the delta variant, more countries are imposing travel restrictions resulting in a larger share of U.S. travelers opting to avoid long-distance trips to Asia and Europe in favor of closer-by destinations.

Because the border with Canada was mostly closed through June, only 178,000 Americans entered Canada through June of this year, meaning that 12.2 million U.S. residents visited Mexico. The data for Mexico is only 38% below the 2019 travel volume and puts into sharp contrast the difference in government actions in regards to U.S. travelers: Mexico welcomed them with some restrictions; Canada kept the border essentially closed to vacationers.

U.S. citizens did venture outside North America, but the data shows when they did, they stayed closer to home than in 2019. Two years ago, roughly 23% of travelers during the first six months of the year went to the Caribbean. That share has nearly doubled this year to 44%. South American destinations also increased their share of U.S. travelers so far in 2021 from 8% to 17%.

The sharpest drop in U.S. travelers occurred in Oceania, a large area that includes Australia, New Zealand, Micronesia and Polynesia, with a decline of 97%. In 2019 around 3.3 million U.S. travelers visited Asia. So far this year the number decelerated to 214,000, a 93% decline. The decrease in the number of U.S. travelers to Europe was of similar magnitude. Just under 9 million visited there in the first-half of 2019, while a little less than one million visitors have ventured there so far this year, a drop of around 90%.

As much as the pandemic impacted Americans traveling abroad, outside of Mexico and Canada, it had an even larger impact on foreign trips to the U.S. In the first six months of 2019 more than 22 million U.S. citizens ventured abroad, compared with less than 19 million foreigners visiting the U.S.

The global pandemic and the corresponding border closures, quarantine requirements and increased uncertainty about global travel has curtailed those counts sharply. Through June 2021, 85% fewer foreign tourists and business travelers entered the U.S. and likewise the number of U.S. residents taking trips abroad dropped sharply by 73%. 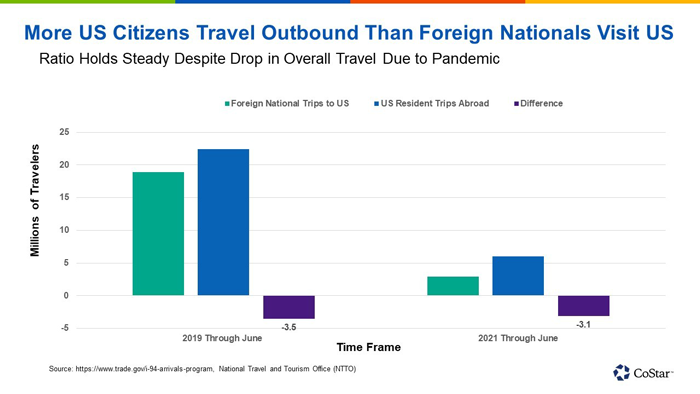 These declines have not altered the overall trend that more U.S. citizens travel abroad than foreign nationals visit the U.S. For the year 2019 this net outbound number stood at 3.5 million trips, in 2021 the number had not changed materially and still stood at 3.1 million trips.

The hope in future years is that vaccination rates here and abroad will continue to go up allowing countries to ease travel restrictions and tourism flow will increase.

If past travel behavior is a guide, when that happens, trips by U.S. citizens to Europe and Asia will increase by a large factor. Likewise, many more foreigners, especially from Asia, are expected to visit American cities and landmarks.

For now, as the border with Canada slowly reopens, Canadian tourist attractions should expect to see a large influx of U.S. travelers and their valuable tourism dollars over the second half of this year.