17 Hotel Markets Have Had Best Summer Ever


Weekday demand for U.S. hotels was the highest it has been since early August 2019 as weekly industry performance resurged from a post-holiday lull.

The top 25 largest U.S. hotel markets also had their second-best week of the pandemic era.

Both benchmarks indicate a rise in business travel, complementing a base of robust summer leisure travel. 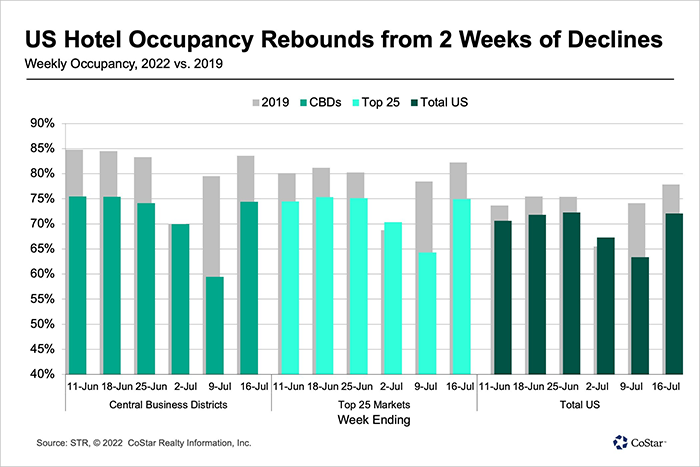 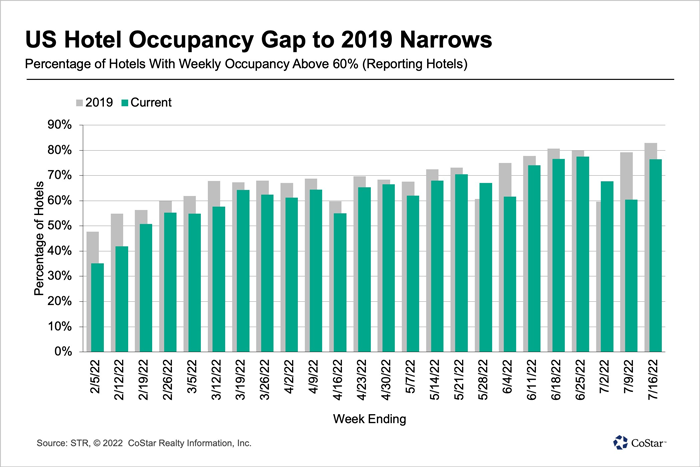 Average daily rate for the week was the third highest ever recorded by CoStar hospitality analytics firm STR, advancing 2.3% week over week to $157. High rates and occupancy combined for the second highest weekly revenue per available room on record at $113, just 41 cents below the record set in the week ending June 25, 2022.

Nominal ADR for the week was 15% higher than in the same week of 2019 and 12% higher than a year ago. While this week’s nominal ADR was only the third highest since 2000, the top 10 highest nominal ADRs of all time have been achieved in 2022 with six of them occurring since the start of the summer. Adjusted for inflation, weekly ADR reached $138, the fourth highest level achieved in the 29th week of the year.

After falling below 2019 the previous week, nominal RevPAR rose by 16% week over week, 14% compared to last year and 6% over the 2019 level. Weekly nominal RevPAR was the highest of any week 29 before it, but in sixth place when adjusted for inflation. 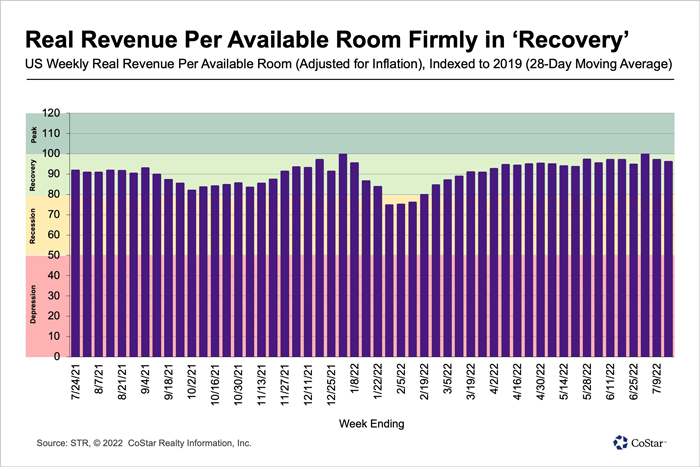 Weekday occupancy in the top 25 markets ranged from 91% in San Diego to 51% in New Orleans. Nine hotel markets including Boston, Chicago and New York posted occupancy above 80% for those three days. Another 10 markets had weekday occupancy between 70% and 80%.

Seventeen of the 166 STR-defined U.S. hotel markets — including Atlanta, Austin, Charlotte, Dallas and Nashville — have had their best summer ever in hotel demand. The Denver and Orlando hotel markets have recorded their second-best summer demand so far. New York hasn’t done too badly either, with summer demand for its hotels at the fifth highest level since 2000.

Along with the strong occupancy, six markets — including Atlanta, Minneapolis, Philadelphia and San Diego — had their highest weekday demand since the start of the pandemic. For the entire week, demand for the top 25 markets was the third highest of the pandemic era, driving occupancy to 75%.

Only two markets achieved record-high nominal ADR for the week: Montana and Washington State. Adjusted for inflation, none of the top 25 markets set a record for ADR, and Orange County (Anaheim) got the closest with its third highest real ADR in the week.

Luxury and upper-upscale hotels led a rebound in group demand, selling 1.8 million group room nights in the week. Absolute group demand was the sixth highest since the start of the pandemic with weekday group demand coming in eighth place. Like total demand, the gain in group demand was centered on the weekdays, which accounted for 68% of the week-over-week increase.

For upscale hotels, the weekly demand was the second best behind the high watermark attained four weeks ago. Demand was also somewhat robust for luxury and upper-upscale hotels, but to a lesser extent as they achieved their sixth-highest demand for week 29.