Weekday hotel occupancy, an indication of strengthening demand from business travelers, reached the highest level since the summer of 2021, the latest weekly U.S. performance data from STR shows.

By day of week, top 25 occupancy on Tuesday (71.4%) was the best for that day since before the pandemic. Wednesday’s top 25 occupancy (72.6%) was the second highest for that day and the third highest of the week behind Friday and Saturday. As indexed to 2019, total weekly demand in the top 25 was 96% of what it was in the comparable week, and it has been above 90% in each of the past seven weeks. 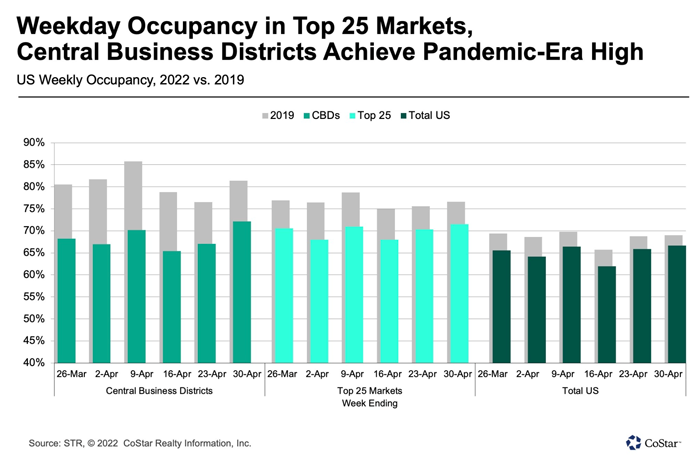 Occupancy in central business districts was 72.1% for the week and 72% on the weekdays.

Driving some of those gains, hotel demand from groups reached its highest level since late 2019 and more than 2 million rooms were sold to groups at luxury and upper-upscale hotels.

Group demand during much of the pandemic has been driven by social groups on weekends, but day-of-the-week patterns suggest this is shifting somewhat. Weekday group demand for the week was the highest its been since early 2020, with 12 of the top 25 markets — including Atlanta, Boston, Chicago, Dallas, Miami, Nashville, San Diego and San Francisco — reporting pandemic-era highs in the metric. 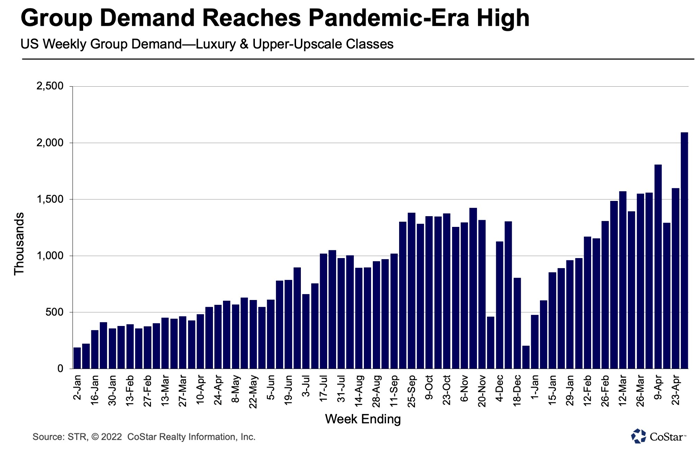 All of these trends point to a rise in business and group travel, which has been the largest missing piece in the hotel industry’s recovery from the COVID-19 pandemic.

Adding already robust leisure demand, which has led the recovery, the U.S. hotel industry as a whole achieved weekly occupancy of 66.6% — the second-highest level of the year, and the third time this year that occupancy has surpassed 66%.

For comparison, occupancy only surpassed 66% seven times last year, all of which came during the summer.

Weekday occupancy was 64.8%, as more than two-thirds of all hotels reported occupancy above 60%, which is also the most since summer 2021.

U.S. hotel industry average daily rate dipped by 1.4% week over week to $147, but that level was 10% higher than in the comparable week of 2019 — marking the 12th consecutive week, going back to early summer 2020, that ADR has surpassed 2019 levels. Considering inflation, real ADR was 2.5% less than the matching week in 2019, and only 46% of markets had an ADR higher than what was reported pre-pandemic.

Revenue per available room was flat week over week with a 6% premium over 2019. RevPAR has surpassed 2019 levels for the past seven weeks straight — the longest streak of the pandemic era — and in eight of the past 10 weeks.

Across all markets, 73% reported higher RevPAR for the week than in 2019. Real RevPAR, however, was higher in only 46% of markets. Over the past 28 days, 72% of markets had RevPAR above 2019, but adjusted for inflation, real RevPAR was only higher in 42% of them. Seventeen markets — including Boston, Minneapolis, New York and San Francisco — were still in “recession,” with real RevPAR between 50% and 80% of the comparable week in 2019. 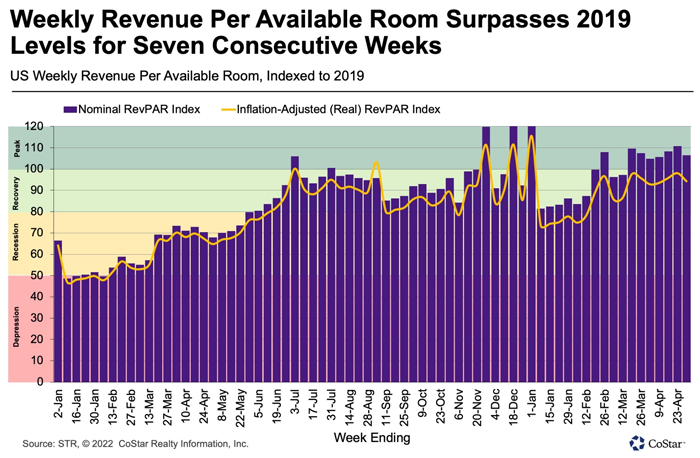 Savannah had the nation’s highest market occupancy for the week at 81.6% and has been in the top five for five consecutive weeks. Among submarkets, the Savannah Historic District was the best with weekly occupancy of 88.3%.

Among the top 25 markets, Dallas (75.7%), San Francisco (75.8%), Seattle (71.5%), and Washington, D.C. (70.3%) posted their highest weekly occupancy since March 2020. All except Seattle also reported their highest weekday occupancy of the pandemic era. For Seattle, it was its second-best. Occupancy in San Francisco has been above 60% in six of the past seven weeks, and weekday occupancy has been at 69% or higher for the past three weeks.

Occupancy in New York City has been above 70% for the past seven weeks, its longest streak at that level since early 2020. Additionally, occupancy in the city has been above 75% over the past four weeks with the most recent week’s level (77.2%) being the fifth-highest since the start of the pandemic. The market’s pandemic-era high was 81.9% at Christmastime.

The strength of ADR was initially driven by markets outside of the top 25, where the level has been above 2019 since early in the summer of 2021. The top 25 markets, however, are now catching up in ADR, surpassing 2019 levels in 10 of the past 11 weeks.

Dallas, San Francisco, Seattle and Washington, D.C., reported their highest ADR since the start of the pandemic. Overall, 88% of all STR-defined U.S. markets reported weekly ADR that was above the 2019 comparable.

Top 25 markets are also catching up in RevPAR comparisons to 2019, with RevPAR just below pre-pandemic levels in the latest weekly data.