Which Website Has the Cheapest Hotel Rates? A New Study Compared Prices to Find Out


Many travelers try to save money by searching the internet for cheaper hotel rates.

But a new study suggests it may not be worth the time — at least in some places.

According to the results published last week, Hotels.com had the best overall rates — but just barely.

Hotels.com had the best rates in 620 instances, which was slightly higher than Expedia, which had the cheapest rates in 579 instances.

Booking directly with a hotel was more expensive, but by only about $6 more on average, according to the study.

“There have been conflicting views on hotel rates, and people ... believe that booking through online travel platforms ensured a better rate than the hotel website,” said Shalabh Arora, director of marketing at India’s Four Seasons Hotel Bengaluru. “However, it’s not so at Four Seasons where rate parity is taken very seriously.”

Finally, the website Booking.com had the cheapest rates in 72 instances — or about 7% of the time — according to the study.

“Not only was [Booking.com] rarely the most affordable, but it was also the most expensive option the majority of the time,” according to the published results.

The company’s Managing Director for Asia Pacific Laura Houldsworth responded to the study by email, stating that the company aims “to always be transparent with our customers” and that “our property partners are free to set their own prices on Booking.com.”

She added that “our promise to price match also means that if a customer should ever find a lower price on another website, Booking.com will refund the difference.”

The report found average hotel rates on Hotels.com and Expedia were the same in seven of 19 cities, with overall averages varying by just 27 cents.

“Expedia and Hotels.com often had the same price, especially with the international hotels,” said Sarah Webber, director of marketing for InsureMyTrip.

Both brands are owned by Expedia Group, which also operates other travel booking websites, including Travelocity, Hotwire, Orbitz and CheapTickets.

“Hotels working with Expedia Group distribute their rates across all of our brands,” said Anna Brown, a company public relations manager. “The rate is similar across brands, however various offers ... approved by our hotel partners, sometimes create rate differences.”

Booking.com is part of Booking Holdings, which operates Priceline, Agoda and Kayak. Booking Holdings had the highest revenue among all online travel agencies from 2019 to 2021, according to the research company Statista.

The InsureMyTrip report showed significant rate differences in certain cities. For instance, travelers could save as much as $88 per night in Honolulu, if they found the lowest price.

In New York, the report found average hotel rates varied from $293 on Hotels.com to $367 on Booking.com. 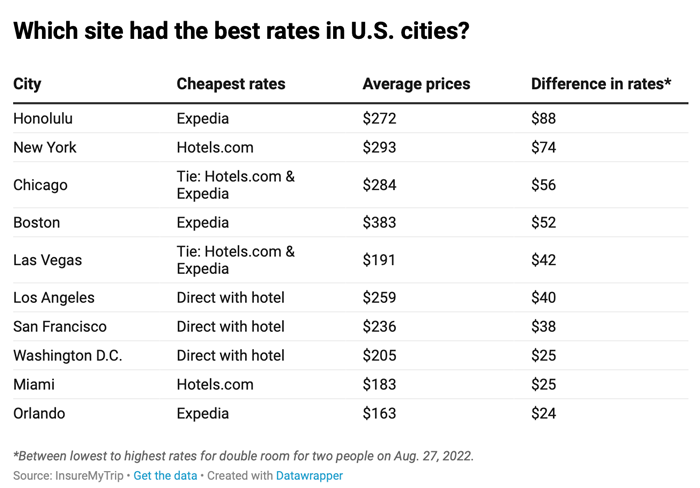 
But rate fluctuations were less pronounced outside of the United States.

Posted rates varied less than $10 per night on average in Hong Kong, Bangkok, Macau, Kuala Lumpur and Istanbul, according to the research. 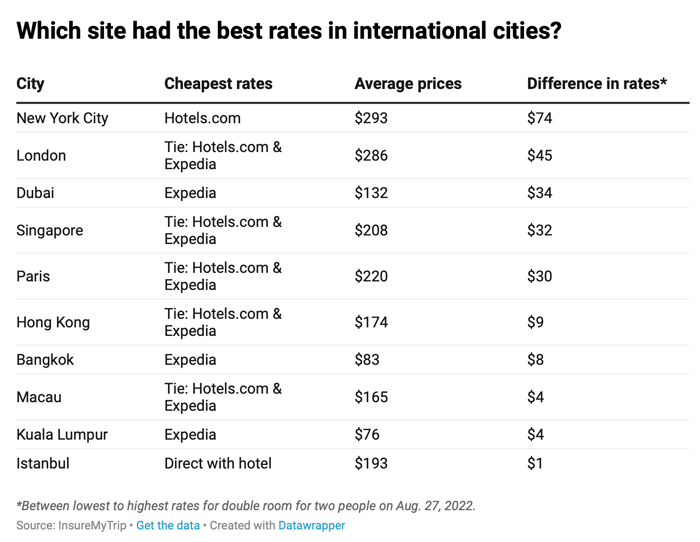 InsureMyTrip’s study represents a snapshot in time, with the research analyzing rates for a double room for two people booked for the night of Aug. 27, 2022, the firm said.

All searches were conducted on the same day to avoid price fluctuations, since “prices can change quickly and without warning,” said Webber.

However, the study did not consider whether rates were refundable or included taxes, said Webber.

“To keep the study as simple as possible, we took the price seen on the sites as the final cost,” she said. “So, it’s definitely something to consider as not all hotels or booking sites include the same extras in the final price.”

Other factors, such as prepayment requirements and breakfast inclusions, can affect rates too, which further complicates the hotel price comparison process — for researchers and travelers alike.